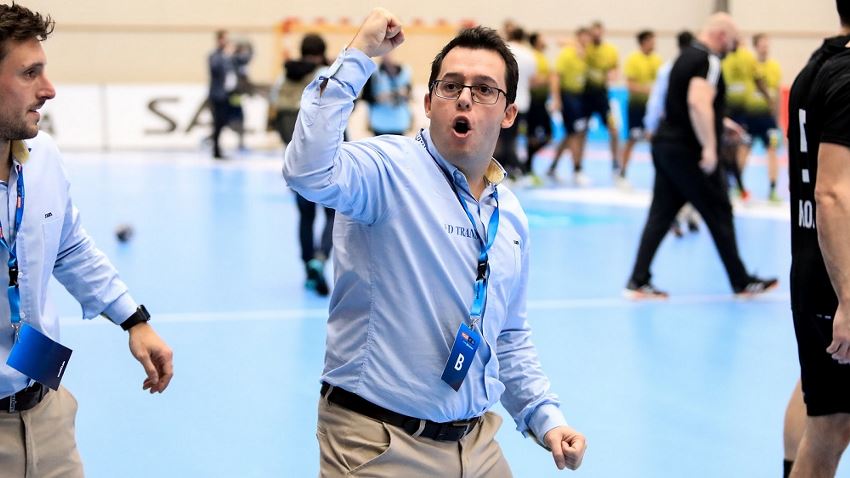 Back with a bang: Bidasoa’s weapon called confidence

Without doubt, Bidasoa Irun are one of the revelations of this season’s VELUX EHF Champions League.

Six rounds into the group phase, the Spanish side is still unbeaten with five wins and a draw, and leads group C three points clear of IK Sävehof and four of Sporting CP, with a berth for the group C/D play-offs within reach.

Their next match is at home against Tatran Presov, Saturday at 16:00 CET (live on ehfTV.com).

“Yes, we are surprised”

Even to the club itself, the highly successful return to Europe’s top flight has come as a surprise, 25 years after Bidasoa Irun won the EHF Champions League.

“Exciting,” is the word coach Jacobo Cuétara, the architect of the current team, uses to define the season start.

“Yes, we are surprised,” he says. “We started the competition with no references, with doubts about which would be the real level of the group and where we would be. After some months we are leading, and it’s not just the classification, it’s also our handball. We have been competitive. We are ambitious. We want to keep winning and improving.”

Fight, dedication, team work and confidence are the strengths behind Bidasoa’s achievements.

Even though they are strong favourites to enter the play-offs, Cuétara is reluctant to look beyond the group phase.

“There are lots of battles before it and it would be a mistake to think about that,” he says. “We must be focused to win against Tatran Presov on Saturday and to improve our level.”

“The team always knows what to play”

According to Cuétara, an important factor behind his team’s success is its playing system.

“The team always performs and knows what to play. We know our asset and what it can bring us,” says Cuétara, who likes to rotate a lot during matching to give his players an equal amount of playing time.

“It makes everyone involved, they all feel important,” he says. “The changes keep up the level of play and rhythm for 60 minutes, something that is difficult for the opponent.”

Cuétara arrived in 2016, having coached Villa de Aranda and worked as assistant coach at Ademar León. He is the architect of the current Bidasoa, collecting the fruits of three years’ work.

He changed Bidasoa from a team fighting relegation from the top Spanish division to the runners-up behind Barça last season.

Known as a very methodic coach who works hard and passionately, Cuétara has gained everyone’s respect in the club. Also, he has received some offers from other clubs, but with a clear idea for the future, he has extended his contract with Bidasoa until June 2022.

“It’s a project which can continue to grow, it’s unfinished work,” he says.

The contract extension for Cuétara was not a stand-alone action by the club, which also had two key players sign new deals: right wing Kauldi Odriozola, one of the young pearls of Spanish handball, and centre back Jon Azkue.

It is a sign for coach and players holding together, believing in what they do. New challenges will come up but they have their confidence as their best weapon.