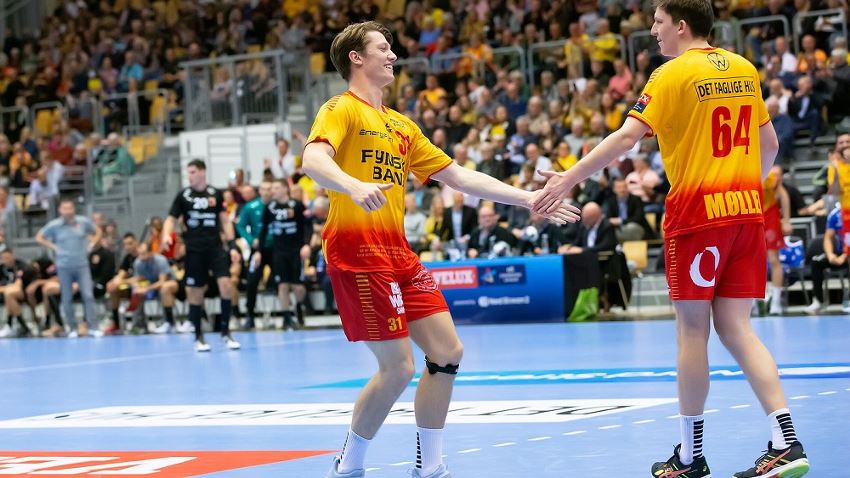 Six talking points after an action-packed round 5

829 goals, or an average of 59.2 goals scored per game, were registered in round 5 of the VELUX EHF Champions League.

As records were shattered, the battle for first place in group A has been getting tougher, while Kiel had their best start of the season in the past decade.

Meanwhile, groups C and D reached their midway point, with the play-off picture getting a bit clearer.

Let’s see what happened in the last 14 games of the VELUX EHF Champions League before a one-week break.

This is THW Kiel’s best start of the season since 2010/11, when they threw off with five wins and a draw in the first six games. Yet the feeling is the ‘Zebras’ navigated through a difficult schedule with a masterstroke as they comfortably lead group B, boasting three points ahead of Veszprém, Montpellier and Vardar after five rounds. In last round’s Match of the Week, Kiel had their share of trouble when they scored only four times in the first 15 minutes of the second half, but with a magnificent 11-goal salvo from Lukas Nilsson, the German side did enough to grab their fourth win in five games, 33:30. Alongside a great attack, Kiel also amp up their defence when needed, while coach Filip Jicha does not look like a rookie on the bench, rather a seasoned coach, with years of experience behind him. The German side look like the favourite to snap up a quarter-final berth directly by winning the group, especially as their next three games look winnable: a double-header against last-placed Motor and a trip to Porto expecting Kiel in November, with a home game against Montpellier finishing off the month.

A wake-up call for Vardar

After scoring only four goals in the first half against Kiel in round 4, Vardar felt like there was time for a change, despite the title holders losing only one game. Eduard Koksharov took the reins, as Spanish coach David Pisonero was relegated to the assistant position, but Vardar’s problems are not on the bench, rather in the roster. Despite masking their lacks with three straight wins to throw off the season, the Macedonian side needs improving on almost every position after an exodus of players last summer. There is no easy way to put this, but the title-holders were easily left behind by both Kiel and Veszprém in the past two rounds, conceding 70 goals over two games, after conceding 88 goals in the first three. Their attack was also under par, with a lot of missed shots by Dainis Kristopans, Timur Dibirov or Stas Skube, as their challenge to reach the VELUX EHF FINAL 4 looks harder and harder round by round.

The top three of left wings

Once again, the top goal scorer ranking has suffered alterations after a round with a ton of goals scored and there is a pattern emerging. Teams are paying more attention to their wings, especially left wings. It may be a sign of feeding them more balls, especially when a team has the advantage after an opponent’s suspension or even when they have a suspension and the goalkeeper is taken off to create a six-versus-six situation. Moreover, there is the case of fast breaks and the current standings can be explained. All in all, the top three scorers in this year’s VELUX EHF Champions League after five rounds are left wings: GOG’s Emil Jakobsen tops the chart with 34 goals, closely followed by Aalborg’s Sebastian Barthold and Vardar’s Timur Dibirov with 33 goals each. And a right wing, Presov’s Javier Munoz Cabezon, is close with 31 goals.

Bam! Check out this perfectly placed rocket from the back court by @aronpalm as @fcbhandbol take a commanding win over PSG 💪🎯 #veluxehfcl #ehfcl

With PSG’s loss against Barça and Sävehof’s drubbing against Bidasoa, the myth of a perfect season in the group phase of the VELUX EHF Champions League is gone once again. The only two teams with a flawless record after four rounds were beaten, as PSG’s plethora of injuries did not help them while the Swedish team suffered their worst ever loss in the VELUX EHF Champions League: the 16-goal defeat (39:23) was even one goal worse than their 34:19 defeat against Celje back in 2005. Therefore, there are only three unbeaten teams this season in the European top competition: Kiel (four wins, one draw), Bidasoa Irun (four wins, one draw) and Dinamo Bucuresti (three wins, two draws).

Groups C and D are at the halfway mark and the picture is getting clearer regarding the two teams that will advance to the play-offs. Unbeaten Bidasoa Irun had a superb start of the season in their comeback to the VELUX EHF Champions League, opening a four-point gap ahead of third-placed Sporting, with only five rounds to go and a home game against the Portuguese side. The Spanish side also boast the second best defence in the competition – 120 goals conceded – after they saw off Sävehof 39:23. However, the Swedish side also has a three-point advantage ahead of Sporting, as they could also progress before the last game of the group, which will take place in Lisbon. Moving on to group D, unbeaten Dinamo are tied with GOG at the top with eight points, three more than Orlen Wisla Plock. The Romanian champions, who drew against Plock on Sunday, 26:26, could tighten their grip on a play-off berth with a win in two weeks’ time against the Polish side on their home court, where they won both games until now.

A five-way battle for the first place in group A

Meanwhile in group A, the race for the top position is almost impossible to predict. There are nine games still left, but three teams are now tied at the top with eight points, while other two are close at only one point behind. PSG’s four-game winning streak has been stopped in its tracks by Barça, who are now themselves on a four-game winning run, after taking PSG’s scalp last weekend, 36:32. There is also the surprise case of Aalborg, who won four games and tied the two powerhouses in the standings, but the Danish side’s suspect away form and lack of experience could hurt them in the long run, as they will meet PSG and Barça two times each in the next four rounds. Looming behind the leading trio, MOL-Pick Szeged and Flensburg are just one point behind and are hoping for the leaders to drop any beat to take advantage. However, the German side will also meet Barça and PSG four times in the next four rounds, a tough schedule, especially considering they lost last weekend against Aalborg, 31:28, with their defence collapsing under pressure.