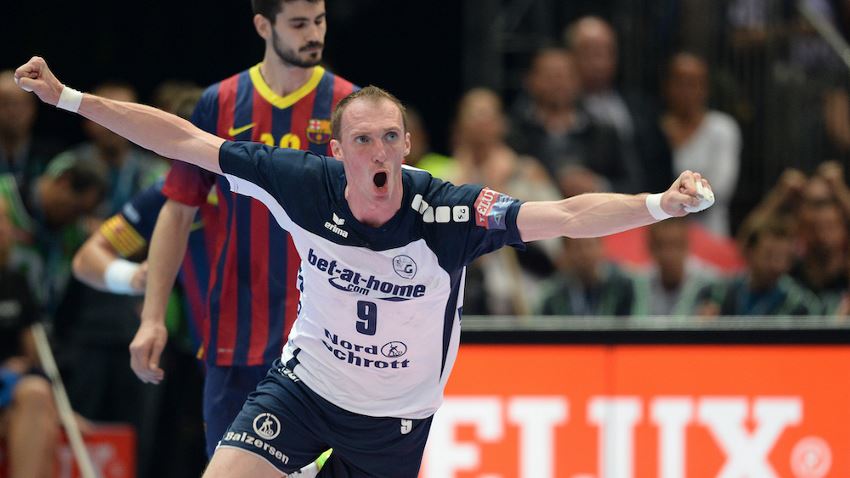 Looking back to a ‘flen-sational’ weekend

Ljubomir Vranjes was thrown into the air by his players, and the team simply could not believe that they had just become VELUX EHF Champions League champions.

The 30:28 victory in the final of the VELUX EHF FINAL4, against their arch-rivals THW Kiel, served as belated revenge for the narrow defeat against the ‘Zebras’ in the 2006/07 finals.

But even more impressive was what had happened less than 24 hours before. In the semi-final, Flensburg turned a six-goal deficit eight minutes before full-time against FC Barcelona into the first ever penalty shootout victory in the history of the VELUX EHF FINAL4.

The 41:39 result was a historic one after a historic match, finally decided by an ice-cold penalty shot from then 20-year-old Swedish left wing Hampus Wanne, after SG goalkeeper Mattias Andersson saved Barça’s final penalty against Nikola Karabatic.

In our series of article looking back at past VELUX EHF FINAL4 highlights, this time the focus is on the ‘flen-sational’ success of Flensburg’s maiden (and so far only) voyage in Cologne in 2014 including that stunning semi-final against Barça.

The roles had been clearly marked before this semi: Flensburg were the underdogs, Barcelona the clear favourites – but the path to Cologne was similar.

In the group phase, both sides took eight victories, one draw and one defeat. In the Last 16, Flensburg had more problems eliminating Celje (30:27 at home after a 25:26 away defeat) than Barcelona had in their double win against Aalborg.

In the quarter-finals, both sides were close to elimination, as they only made it to Cologne thanks to the higher number of away goals. Barcelona had lost 31:38 at Rhein-Neckar Löwen, but had a magic night in Palau Blaugrana, winning 31:24.

Flensburg needed the last shot of the second quarter-final leg to clinch their berth for their debut at Cologne. After a 24:22 win at home against Vardar, they were down 23:27 with only two minutes left. Finally, Holger Glandorf netted and, in the last attack of the match, he could only be stopped by a foul. Anders Eggert scored the penalty for the 25:27 result and the ticket to Cologne.

It was in minute 52, when all the chips seemed to be down for Flensburg. After a temporary 8:2 run, Barcelona were ahead 32:26.

SG coach Ljubomir Vranjes gave his youngsters playing time to breathe the incredible atmosphere in the sold-out LANXESS arena for the final minutes. Seeing the change of the Flensburg line-up, Barça coach Xavi Pascual made a terrible mistake, also giving his top players time to rest.

Flensburg reduced the gap goal by goal, taking the momentum, and the youngsters such as Bogdan Radivojevic grabbed their chance, while Sören Rasmussen saved many important shots. It was 2007 world champion Holger Glandorf who secured the extra time period with a buzzer-beating goal.

Both teams had the chance to win, but in the end, the first ever penalty shootout was needed to decide Kiel’s opponents in the final.

Incidentally, Flensburg were also down by six in the final against Kiel, but much earlier in the match. Therefore, they are the only Champions League winners in Cologne to have turned a deficit of six around twice in two days.

Player of the match: Holger Glandorf

It was the match of his life, not only because of his crucial strike in the dying seconds. Flensburg’s two rights backs, Glandorf and Steffen Weinhold, scored eight goals each, but the 2007 world champion hit the net when it counted.

Passing through Barça’s defence like a warm knife through butter, Glandorf became the hero of this historic match. Finally, Glandorf, who has just ended his career, had won his fourth European cup trophy – but the one and only in the VELUX EHF Champions League.

When looking back on Flensburg’s goalkeeper’s performance at the VELUX EHF FINAL4 2014, everybody talks about ‘Magic Mattias’ Andersson. The Swede, who had previously won the Champions League in 2007 with THW Kiel, was the hero in the penalty shootout and one day later in the final against his former club, when he put on a stellar performance.

But Dane Sören Rasmussen, who had always been the number two behind Andersson, saved his side in crunch time, making seven saves in 14 minutes at the end of regular time. The final against Kiel was his last match for Flensburg, before he returned home to Bjerringbro. He also won the EHF Cup Winners’ Cup with Flensburg in 2012.

“Our dream came true. For most of it us it was the first ever Champions League semi-final. Now we are in the final. Simply brilliant,” said Flensburg right back Weinhold. After winning the VELUX EHF Champions League, Weinhold transferred to the final opponents THW Kiel, where the left-handed national team player remains.

A pass at the middle line, three steps, only Victor Tomas stepping out to try to stop him, a jump, a shot from almost 11 metres, a chanceless goalkeeper, a ball in the net – and then a scream, which shook the walls of LANXESS arena: this was Holger Glandorf’s goal for the 32:32 equaliser right before the final buzzer in regular time.

Rarely seen more emotions from a player usually calm after scoring any goal.

In 2004 and 2007, Flensburg were Champions League finalists. In 2014, they finally won the trophy. But their victory ended up being a turning point in the history of the VELUX EHF FINAL4.

But since 2014, no German team has made it to the final. Even worse for the Bundesliga: in 2017, 2018 and 2019, not a single German team qualified for the VELUX EHF FINAL4, and Flensburg have waited for their next chance at a flen-sational weekend since 2014.

Barça did the opposite: After failing twice in a row (final against Hamburg in 2013 and semi against Flensburg in 2014), Xavi Pascual’s side struck back in 2015, winning the final against Veszprém. It was their second victory in Cologne, after 2011, and their eighth in total in the history of this competition.

What is the worst punishment for the losing side in a Champions League final after a defeat against your local rivals? To fly home in the same airplane with the victors the day after the final. To see the trophy, which is not yours, and to hear the songs of joy, which are not your anthems.

Fortunately for THW Kiel, it was not a round-the-world trip, but only a 50-minute flight from Cologne to Hamburg in the same plane with SG Flensburg-Handewitt.