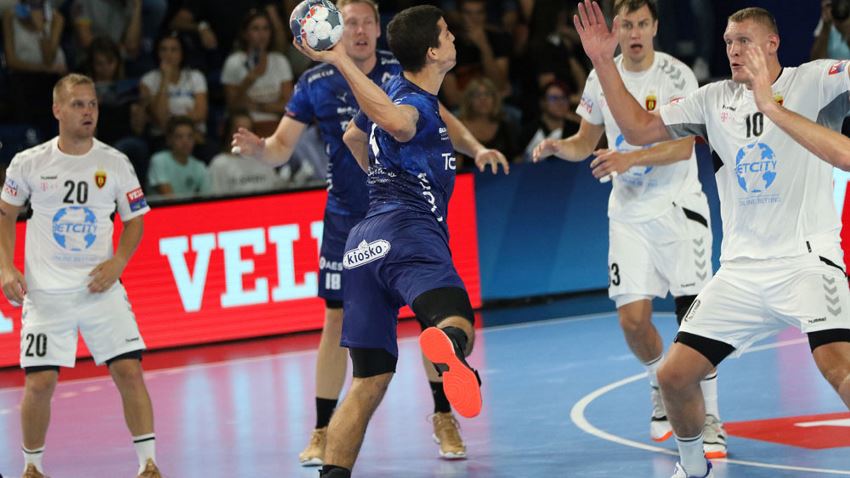 The title holders showed the same grit and intensity despite a summer exodus, as they enjoyed a great night out in attack to win their maiden game of the season, 33:31, against 2018 VELUX EHF Champions League champions Montpellier.

Meanwhile, in the second game of the group, FC Porto Sofarma capped a superb comeback to the European top flight, taking a 27:25 win against Brest, despite a poor first half.

It was grit and the team spirit that propelled Vardar to their second VELUX EHF Champions League trophy last season, but with so many players gone this summer, it was hard to think that the Macedonian side would bring the same recipe to the table.

Left wing Timur Dibirov led Vardar out to a 10:8 lead after scoring four times in the first 20 minutes before Montpellier bounced back. Right back Valentin Porte was in fine form, scoring six goals from six shots in the first half, but nevertheless the hosts held only a slender 17:16 lead at the break.

It was a nip and tuck battle for the win between the two previous winners of the Champions League. Vardar jumped to a 25:23 win with 17 minutes to go. It looked like Montpellier were on a superb comeback thanks to a 4:1 run that turned the game on its head, but there were more surprises on the menu.

A resilient Vardar, relying heavily on the game’s top scorer Stas Skube, bounced back and secured a 33:31 win, thanks to a top-notch attack and a calmer approach than a nervy Montpellier.

Montpellier captain Porte conceded that Vardar’s experience showed towards the end of the match, and coach Patrice Canayer was hopeful that his team can perform better.

“If you look at the statistics we were better than Vardar in a lot of them, apart from the turnovers,” he said. “We had a good shot efficiency rate, but this dropped in the last seven or eight minutes. Nevertheless I saw a lot of things which leave me optimistic for the future.”

Vardar left back Christian Dissinger said: “Both teams made a lot of mistakes in the first half, but in the second we tightened our defence and got several steals. It’s great to start with two points but we know that we can play better than this in the future.”

Fresh from their best season ever, with a domestic double and a berth in the AKQUINET EHF Cup Finals, FC Porto Sofarma are back in the European premium competition after four seasons.

But a dismal display in the first half against Brest, with only nine goals scored in 30 minutes, meant that Porto were brought sharply down to earth.

After disappointing away performances last season, Brest were impressive at both ends, especially thanks to a stellar performance from Serbian right wing Darko Djukic, who scored seven goals from seven shots in the first half.

While it might have looked like Brest had the upper hand, Porto had the fire burning in them and a 5:1 run after the break, spurred by Diogo Branquinho and Fabio Magalhaes, cut the gap to only one goal, 19:18. Another 5:1 run capped a superb comeback by Porto as Branquinho took the load once again, scoring eight times, to lead the Portuguese side to their maiden win of the season.

Brest will rue once again a missed chance, but will hope to bounce back against Montpellier next week, while Porto travel to Vardar.