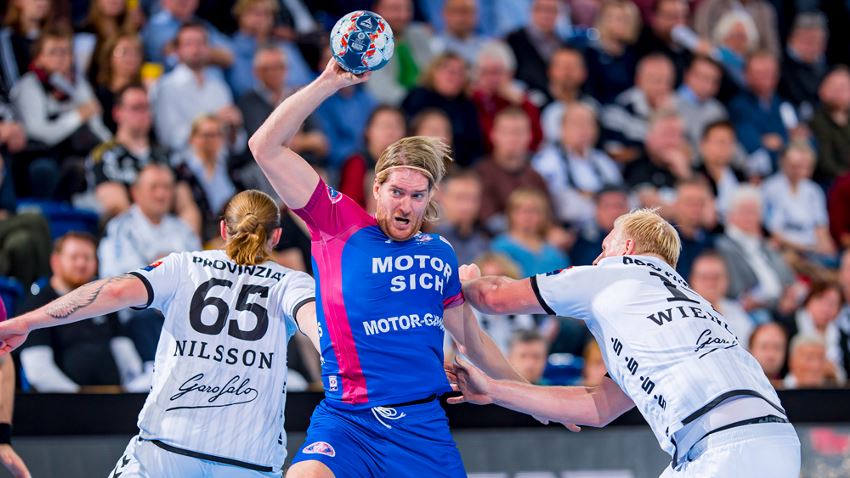 Lowly Motor hold leaders Kiel to a draw in Group B

A home loss, a win by one goal and a draw. Kiel's recent VELUX EHF Champions League form does not look pleasant, yet the German side still lead Group B and will do going into round 10 as they boast a three-point gap ahead of second-placed Montpellier.

Their fans expected more this evening against the bottom side from Ukraine but defensive weakness and lack of cohesion and concentration in attack cost the ‘Zebras’ who were thankful for a draw in the end.

Losing playmaker Domagoj Duvnjak due to a muscular injury until the end of 2019 was a blow for THW Kiel, but few of the German fans would have expected such a difficult game against previously winless HC Motor Zaporozhye.

In fact, Kiel beat the Ukrainian side, 30:27 three weeks ago and were rightfully called favourites before the game which they started well, leading 10:8 after 18 minutes.

But in the following 12 minutes, the German side conceded nine goals, as a 5:1 run for Motor, spurred by playmaker Barys Pukhouski, saw the game turn on its head.

The German side disappointed both in defence and in attack, where their efficiency shot up from 46% to 55% in the final five minutes, only for the scoreboard to be still leaning to Motor, 17:16, at the break.

Motor's goalkeeper had an otherworldly 43% save efficiency which needed to be preserved in order to keep the Ukrainian’s side hopes up going into the second period, but, eventually, Kiel was back in business, taking a two-goal lead once again, 20:18, only for a 6:1 run for Motor to silence the loud home fans inside the Sparkassen Arena, as time was winding down.

But this time Kiel beefed up their defence, fine-tuned their attack and with Ekberg in his finest shooting form, closed the game in the last 15 minutes.

It was clear that stopping Pukhouski meant stopping the Ukrainian side and Kiel just exactly that, as they opened a 28:26 gap with nine minutes to go.

It looked as though there was no coming back for Motor this time, despite them deploying a seven-man attack by taking out the goalkeeper during their offensive plays, which saw right wing Artem Kozakevych score three crucial goals.

Yet Motor still found a way to tie the game and held on for the last 36 seconds with a suspension on the books, as Kiel failed to score.