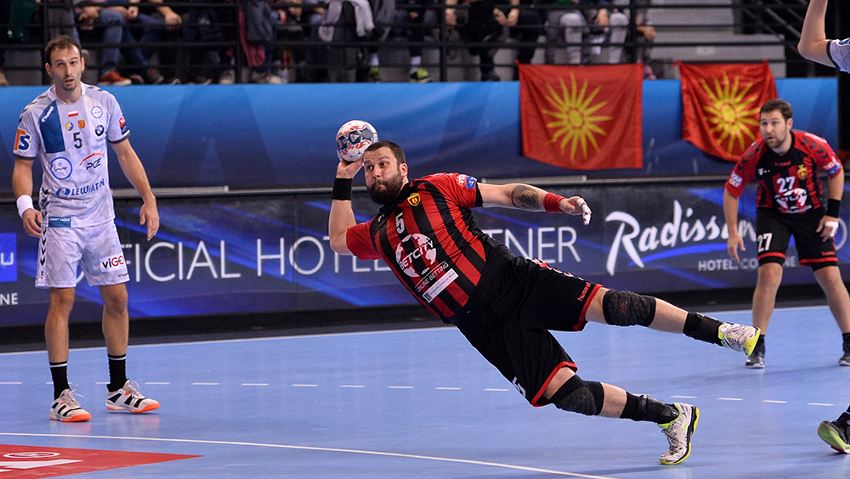 Veszprém snatch first away win of the season, Vardar and Kielce draw

Meshkov Brest went hopeful into the VELUX EHF Champions League Match of The Week on Saturday but Veszprém outmuscled and outgunned the Belarusian side with a superb attacking performance, taking their first away win of the season with a 37:30 victory.

Meanwhile, Kielce had a 6:0 run to thank for earning a point against title holders Vardar, 28:28, but they could have snatched the win if not for a Khalifa Ghedbane save against Mariusz Jurkiewicz with twelve seconds to go.

Vardar are still in the second place, with nine points, one more than Veszprem and Kielce. On the other hand, Meshkov are still seventh, four points behind Porto in their attempt to earn their fifth consecutive Last 16 berth.

It was one of the last chances for Brest to mount a challenge for a Last 16 berth and the scene was set, especially as Meshkov were hosting the Match of the Week against a hungry Veszprem side, that had failed to win a game on away court.

Veszprem usually rely heavily on their attack, but at the beginning of the match it seemed they might struggle offensively, as Rasmus Lauge Schmidt failed to score with his first two shots. Brest, on the other hand, had their shooting gloves on and took an early 5:2 lead.

But when Veszprem started getting into the groove, the Hungarian side quickly overpowered their counterparts, with Lauge Schmidt and the two wings, Dragan Gajic and Manuel Strlek, leading a 7:2 run that put the hosts in front, 9:7.

A pair of powerful shots from former Veszprem back William Accambray helped Brest stay in the game, but it was ultimately the Hungarian side who emerged stronger at the end of the first half, as they took a 20:17 lead after 30 minutes.

Gajic and back Petar Nenadic scored five apiece for Veszprem in the first half, who were boasting a 77 per cent shot efficiency and never looked like they could be stopped.

Gajic continued his scoring streak in the second half, with the Hungarian side taking a 25:20 lead after 40 minutes.

An otherwordly 77 per cent shooting efficiency made Veszprem unstoppable, as the Hungarian side carved an unassailable 30:23 lead, as everything clicked for the guests in attack, while goalkeeper Vladimir Cupara, kept Brest at bay.

It was Veszprem’s fourth game of the season in which they scored at least 37 goals and, coincidentally, the Hungarian side have won all of them, as the final buzzer saw David Davis’ side take a 37:30 win.

Next week, the Hungarian side will host Brest in the rematch, in what could give Veszprem their fourth home win in five games.

Despite being cheered and serenaded by Vardar’s fans, Igor Karacic did not have the best start of the game against his former side.

Generally, it did not go well for Kielce in the first 15 minutes, with the Polish side committing too many turnovers and missing easy shots, to help Vardar take a superb 10:5 lead.

With seven different scorers in this timespan, the Macedonian side looked strong and composed, ready to take their second win in a row.But a resurgence from right back Alex Dujshebaev, paired with a flawless game from Slovenian right wing Blaz Janc, saw Kielce complete a 4:1 run to cut the gap to only one goal.

Riding Dujshebaev’s hot form and superb shot, Kielce took the lead, only for Vardar to end the half with a 2:0 run to enter the second half with a slender lead, 17:16.

Three consecutive goals from Croatian right wing Ivan Cupic gave Vardar to a 20:16 lead to open the second half.

However, an ten-minute goalless stint from Vardar was the title holders’ undoing. An unprecedented 6:0 run for Kielce, who saw Spanish playmaker Angel Fernandez Perez score four times for the Polish side, turned the game on its head, 25:22.

It looked like Kielce may have snatched the win, but Vardar came back, aided by Stas Skube’s superb form. The diminutive playmaker scored seven times and dished out several important assists to help his side take back the lead, 28:27, with one minute to go.

Kielce scored again, tying the game, and had the chance to clinch the win, only for Algerian goalkeeper Khalifa Ghedbane to save Mariusz Jurkiewicz’s shot in a one-on-one situation.

With the result, Vardar are still second in the standings, with nine points, while Veszprem and Kielce sit behind the title holders by one point. Vardar and Kielce meet in the reverse fixture in Poland next week.