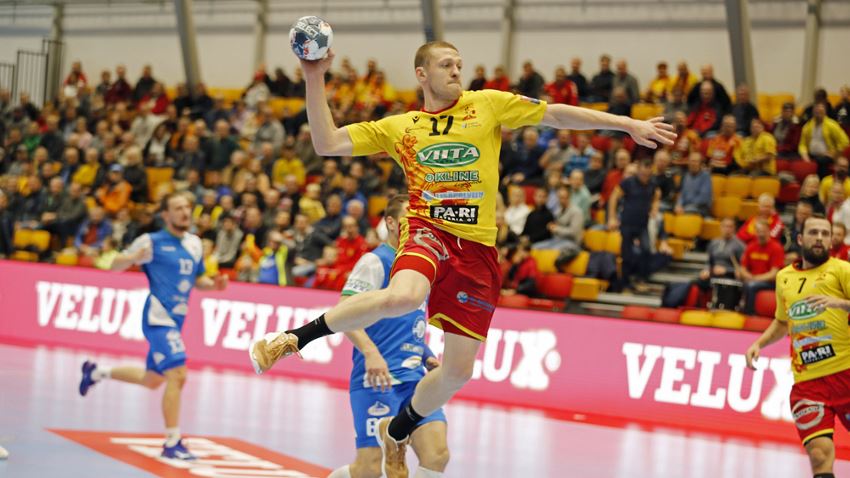 Conceding just eight goals in the second half proved to be the difference at Cocks Areena on Wednesday night as the hosts edged a tense and fascinating group C clash against HC Eurofarm Rabotnik, 23:21.

Unsurprisingly, the clash between the bottom two sides in the group, level on points with four each, went right down to the wire, with neither side holding anything more significant than a two-goal lead throughout the 60 minutes.

Macedonian club Rabotnik celebrated their first win at this level in the reverse fixture in mid-October and were hoping to achieve another first in Finland; their first away victory.

And it was this intent that they began the game with, taking the first significant lead at the 15-minute mark, 7:5.

But Cocks kept themselves in the game with some solid defensive work although they found it difficult to capitalise down the other end as they were often left frustrated by Rabotnik goalkeeper Nikola Mitrevski.

The Finnish champions eventually enjoyed more luck in front of goal and two goals late in the half from line player Yury Lukyanchuk ensured they went into the half-time break level at 13:13.

VELUX EHF Champions League top scorer Vladislav Ostroushko scored eight goals when the sides met in that October clash and although his form was more hit and miss on this occasion, he restored Rabotnik’s narrow lead, making it 16:15, with his fourth goal of the day in the 39th minute.

Cocks captain Teemu Tamminen was also battling through an inconsistent shooting day, but he finished a nice in-flight goal to level the scores at 20:20, setting the scene for a tense final 10 minutes.

And tense it certainly was as the sides traded just one goal each for the next eight minutes.

Vitalie Nenita gave Cocks a 23:22 lead with two minutes left on the clock and although the Macedonian side responded with a 7 vs 6 attack, they could not find a way past the resolute home defence, which held on to secure their third win of the season, eclipsing last season’s two victories.

“Losing like this is becoming too familiar for us,” said Rabotnik’s Lovro Jotic in the post-match media conference. “It was a very even match up until the very end and we played really well almost until then, but only almost.

“However, we will take the good things and concentrate on the last group match.”

Cocks player Roni Syrjälä was quick to point out the importance of the eighth player for the Finnish champions. “It feels good to win our last home match in the Champions League group stage and I want to thank our fans for the great support throughout. Of course, it was nice to score the winning goal, but it does not really matter who scores as long as someone does.”