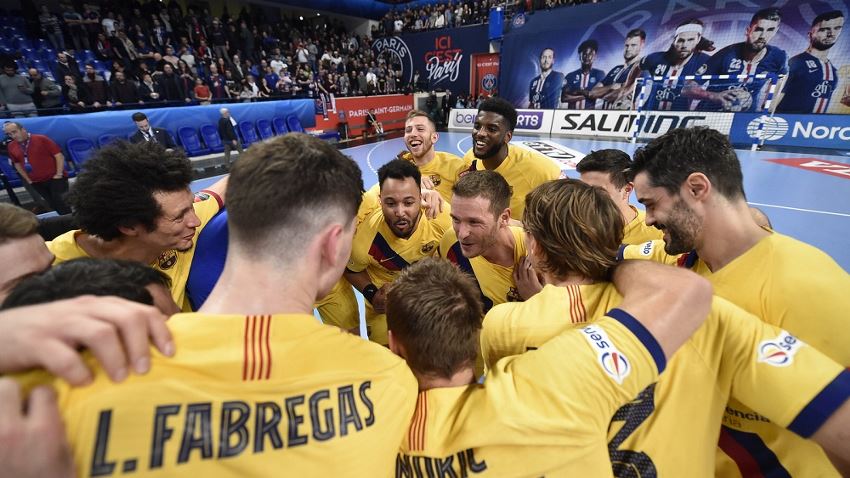 Eight talking points to end 2019 on a high

No team stayed undefeated until the end of the group phase under the current VELUX EHF Champions League playing system - until this season.

Dinamo Bucuresti have completed the feat in group D with a 32:31 win against GOG in the last round before the group phase play-offs.

We also take a look at PSG’s unbeaten home streak being snapped by Barça, but also at how difficult it is to clinch the trophy for two seasons in a row.

Here are eight talking points to reflect after round 10:

The calendar year is over for the VELUX EHF Champions League, but 2019 has provided an entertaining year of handball.

The teams take a two-month break until early February, when the competition will be back with the last four rounds in groups A and B.

However, the handball thirst will be quenched in January, when the Men’s EHF EURO 2020 throws off in Austria, Sweden and Norway, the first ever tournament to be played with 24 teams.

The Match of the Week duly delivered once again, as Barça took an outstanding 35:32 win against PSG in the battle of the giants of group A.

It was PSG’s first home loss since 2014 in the VELUX EHF Champions League, as the Spanish side ended a 42-game unbeaten streak in Paris for the French champions.

The superb free-flowing Barça attack worked wonders, as the Spanish powerhouse are now on a nine-game winning streak, with no team being able to stop them after the first-round loss against Szeged, 31:28.

Right now, Barça have a one-point advantage over Szeged and two points over PSG, holding the tiebreaker against the French side after winning both mutual games.

Will Barça extend their own streak until the end of the group phase, which would be a club record?

They face Elverum, Zagreb and Celje in the next three rounds before finishing off with a home game against Szeged. And PSG showed their limits once again, despite their star-studded line-up.

In previous seasons, PSG started brilliantly but faltered in the end. Are they planning to reach their peak form in spring this time?

What happened to Vardar’s defence?

Over the past seven rounds, Vardar have won only once, as they slipped to sixth place in the standings, five points behind second-placed Veszprém and also five points ahead Motor and Meshkov Brest.

The Macedonian side’s woes have not been in attacking but in never finding their defensive rhythm.

Over the first 10 rounds of the season, Vardar conceded 321 goals, the second largest number of goals in the competition, only two less than Motor Zaporozhye.

Replacing coach David Pisonero with Eduard Koksharov after Round 5 never helped, as last summer’s exodus meant that Vardar could not replicate what they did last season, when they went from underdog to champions thanks to their grit and dedication.

If Vardar want to at least reach the quarter-final phase of the VELUX EHF Champions League, then their woes must be corrected.

2019 is over now and there are still four more rounds in groups A and B, where the big favourites to win the competition are playing. Since the introduction of the VELUX EHF FINAL 4 in the 2009/10 season, no team has ever retained the trophy in the next season.

No team has even qualified for next year’s final and the tradition looks set to continue. Sure, underdogs have written history and overcame huge challenges to put themselves on the map, but it looks unlikely that Vardar can spring another surprise.

The Macedonian’s side schedule is not easier in the final four rounds and there are chances they could face a powerhouse in the Last 16 phase.

The first team to finish the group phase unbeaten

Having already secured the first place in the group last week, some might have expected Dinamo to take it easy against GOG in the final round of the group phase.

However, the ‘Red Dogs’ gave it their all once again and earned the seventh win of the season (32:31), finishing the group with 17 points.

The Romanian champions’ record of seven wins and three draws bettered HBC Nantes’ performance from the 2016/17 season, when the French side finished the group with eight wins, one draw and one loss.

In groups A and B, Barça had the best record in 2016/17 with 12 wins, one draw and one loss. Dinamo have now joined powerhouses like Kiel, Veszprém, Vardar, Barça, PSG and Montpellier, who engineered their own 10-game unbeaten streaks in the VELUX EHF Champions League.

Under the old group phase format, PGE VIVE Kielce once ended with the perfect 10 wins from 10 matches, in 2014/15.

With the end for groups C and D, the competitions is officially over for eight teams: Sävehof, Presov, Cocks, Rabotnik, GOG, IFK Kristianstad, Chekhovskie Medvedi and Kadetten.

But what happened in the last round? Sporting faced a must-win game against Sävehof and the Portuguese side duly delivered with a 27:20 win, securing the elimination play-off berth for the second season in a row.

But Sporting will have their work cut out this time. Last season, Sporting got a 60:58 aggregate win against Dinamo, winning both ties by a one-goal margin. But with Dinamo on a 10-game unbeaten run this time, the challenge looks even bigger this time.

With the second game in Bucharest, the Romanian champions might be regarded the slight favourites, but will the two-month break impact their form?

The second elimination play-off tie will see Wisla Plock face Bidasoa Irun. The Spanish side finished top of group C but won just one of their last four games, while Plock are having the experience and grit to spring a surprise.

Are Barça going to smash the 500-goal mark?

Since the introduction of the current group phase format in 2015/16, PSG have constantly been one of the best attacking sides, placing into the top three each season, topping an average of 30 scored goals per game. However, the record has been set last season, when Barça were close to breaking the 500-goal barrier for an average of 34.7 goals per game.

This time, the Spanish champions are likely to pass that mark, as they are flying close to the best ever offensive performance ever in the group phase of the European top competition.

After the first 10 rounds, Barça have scored 356 goals for an average of 35.6 goals per game and they do not show signs of stopping.

Indeed, they put 35 past PSG in the superb 35:32 win in the Match of the Week on Sunday and have not scored less than 28 goals in any match this season. Veszprém are close by, with 33.3 goals per game, PSG are third with 31.4.

All teams won at least one game

Until round 10, there were still two teams that failed to win a game this season. While Eurofarm Rabotnik and Kadetten Schaffhausen finished last in Groups C and D, they still had three, respective two wins, with Elverum and Motor Zaporozhye still vying to open their mark this season.

Everything went smooth on Wednesday for Motor, who took advantage of Porto’s injury woes and earned a 33:29 win, while Elverum produced their best game of the season, jumping to a 21:13 lead at the break, to secure a 37:26 win against Celje.

There are still four rounds left in groups A and B, therefore the race for the final Last 16 berth is still very much on.