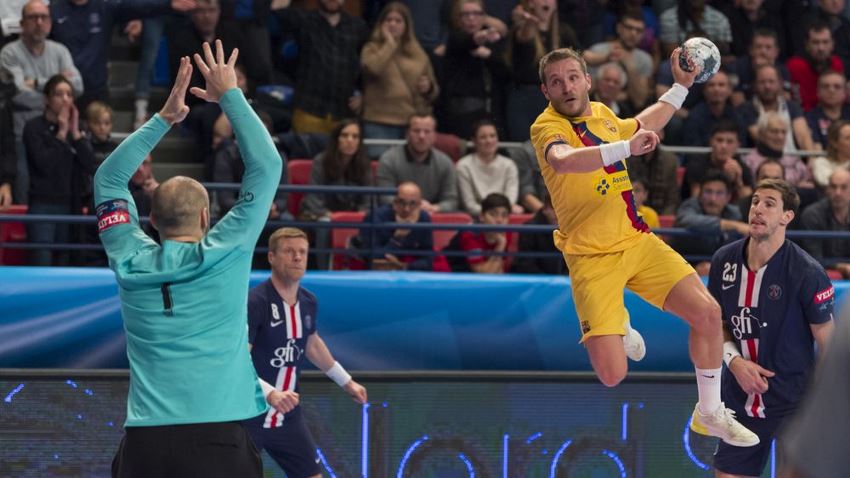 The 176 matches played in the VELUX EHF Champions League have seen everything from last-second winners to heavy beatings, goal feasts and goal famines, surprise results to big dogs showing who is boss.

Selecting just eight of the most entertaining and thrilling matches from this season was no easy task, but here they are.

This clash between two of this season’s most star-studded squads did not disappoint. Both PSG and Barça were level at the top of group A and a win for either side would ensure that they were in first place heading into the winter break.

Mikkel Hansen and Sander Sagosen kept the scoreboard ticking over for PSG, who were without Nedim Remili, but once the guests snatched the lead before half-time they never looked back.

Aron Palmarsson took control when it mattered most and guided Barça to victory, consigning PSG to their first home defeat in the competition since 2014. Both teams’ coaches were keen on acknowledging the quality of the game with Xavi Pascual stating: “This was one of the best games to watch on television. The difference was made on details.”

It was all about the attacks in this clash as goals flew in en masse in a first half which saw five lead changes.

Right back Alex Dujshebaev took matters into his own hands in the second half, driving Kielce to a four-goal lead midway through the second half. His 11-goal contribution would prove to be vital as the Polish champions held on to a one-goal win.

Porto had already earned some plaudits on their return to Europe’s premier club competition this season, but this performance in northern Germany would see their stock rise to a whole new level.

Kiel came into the game on a six-match unbeaten streak, which immediately felt endangered as Porto raced into an early lead. The reigning EHF Cup champions slowly but surely took control and held a four goal lead in the second half.

But Porto were not going to be denied on this day. One last push saw them draw level, before Alfredo Quintana made a dramatic save and set his attack on their way with Rui Silva firing home the winner just before the final buzzer.

In a contest which Veszprém coach David Davis described as "almost the most complicated match" of his time with the club, the Hungarian champions secured second place in the group by the narrowest of margins.

The two halves were polar opposites. It began as a free-flowing goal-fest, which saw both sides enjoy purple patches but Veszprém held the 16:14 advantage at half-time as Dragan Gajic buried six goals against his former club.

Only 17 goals were scored in the second period, thanks largely to commanding goalkeeper performances at both ends. Montpellier had their chances to win, but player of the match Arpad Sterbik had their wing player in his pockets when it mattered most.

Given Flensburg’s turbulent form in Europe this season, it would be fair to say that confidence was not sky-high when PSG came to town for a midweek clash in round 7.

Nevertheless, Maik Machulla’s men showed up for the occasion and displayed great character as they fought back from four goals down in the first half to draw level.

They managed it again in the second half, but PSG just kept finding a way through and a Mikkel Hansen penalty gave them the lead in the final minute. Magnus Rød had a chance to snatch a draw in the final seconds, but Vincent Gérard came up with the save and PSG held on to the points.

The race for the top two places in group C went right down to the wire and that was encapsulated in the events of Irun’s Polideportivo Artaleku in round 9.

A topsy-turvy contest saw both sides seemingly gain control with Irun going four goals to the good in the first half, before being reeled in by half-time, and Sporting in control for much of the second half.

Irun seemed destined to lose their first match of the season but as they did so often in the group phase, they found a way to earn a result as Kauldi Odriozola’s wickedly good buzzer-beater saved the day.

They would eventually emerge as the top dogs of groups C and D, but nothing was certain when Plock and Dinamo faced-off in Poland.

Both sides felt they could have snatched the win on a day where large runs of goals saw the lead switch regularly.

While Niko Mindegia and Lovro Mihic did most of the damage for Plock in attack, with seven goals each, Dinamo displayed their strength in depth with 11 goalscorers. That depth looked to be the difference as the Romanian side held a two goal lead in the final minutes, but Mihic had other ideas as he scored a last-minute equaliser to ensure a share of the spoils.

The race for second place in group A seriously heated up with the visit of PSG to Szeged in round 12.

In a pulsating and high-scoring first half, the French champions controlled proceedings and it took a late flurry of goals from Joan Canelles to keep Szeged in the game, 18:15 down at the break.

PSG picked up where they left off at half-time. After Bogdan Radivojevic was handed a red card and Hansen scored again to put Paris 21:15 up, things were looking dire for the hosts.

But a bit of magic from coach Juan Carlos Pastor inspired Szeged to come roaring back, drawing level six minutes later, before player of the match Joan Canellas together scored three unanswered goals to secure the victory.