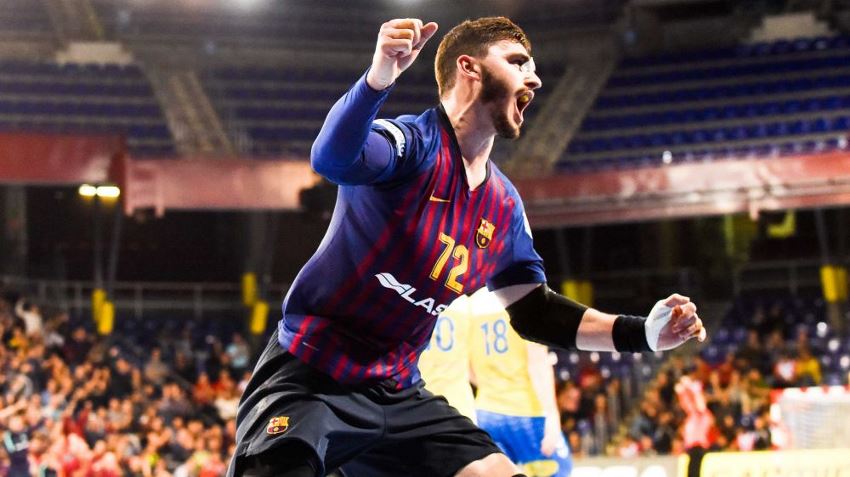 Not since 2015 had Barça Lassa won the first leg of a VELUX EHF Champions League Quarter-final. They did so in sensational fashion tonight, winning by seven goals in Nantes to secure an impressive advantage ahead of the return leg at home next weekend.

HBC Nantes did everything they could, trying many tactical options but to no success. Last year’s Champions League finalists will need an incredible performance in Spain next week in order to return to Cologne.

Barça Lassa were the first to find their rhythm in the game. The opening minutes showed how well they had prepared for their visit to Nantes, with their defence perfectly reading the hosts’ intentions.

After just ten minutes played, the visitors were already ahead by three goals (6:3). Even though Nantes soon came back and levelled the score, it was just a passing phase as Barcelona were the better team on the court, thanks to their line player in particular: Ludovic Fabgreas. Fabregas was having a superb match, scoring six in the first half alone, while the back court players had no trouble finding him with smart passes – and Barcelona were ahead as a consequence at half-time, 16:12.

The visitors scored a 4:0 series when they came back from the dressing room, taking an eight-goal advantage that nearly sailed the deal. Gonzalo Perez de Vargas was stopping every attempt from his opponents, while Aron Palmarsson and Lasse Andersson were scoring from long distance.

After 40 minutes, the 10-goal mark was reached (25:15). Barça had the opportunity to use their bench in the dying moments of the game, giving their opponents a chance to narrow the deficit. But with a seven-goal win, (32:25), Barça clearly moved closer to booking their VELUX EHF FINAL4 ticket.

"We are glad about this game against last year’s Champions League finalist. We came here with ambitions and gave everything to get the score in our favour. But we are only half way through. For sure, Nantes will fight until this end and force us to play even better to go to the VELUX EHF FINAL4," said Ludovic Fabregas after Barça's win.

"We missed way too many things to hope for a better result. We suffered from 14 turnovers and too many fast breaks. The score speaks for itself. I hope we’ll have a surge of pride for next week," added HBC Nantes centre back, Romain Lagarde.