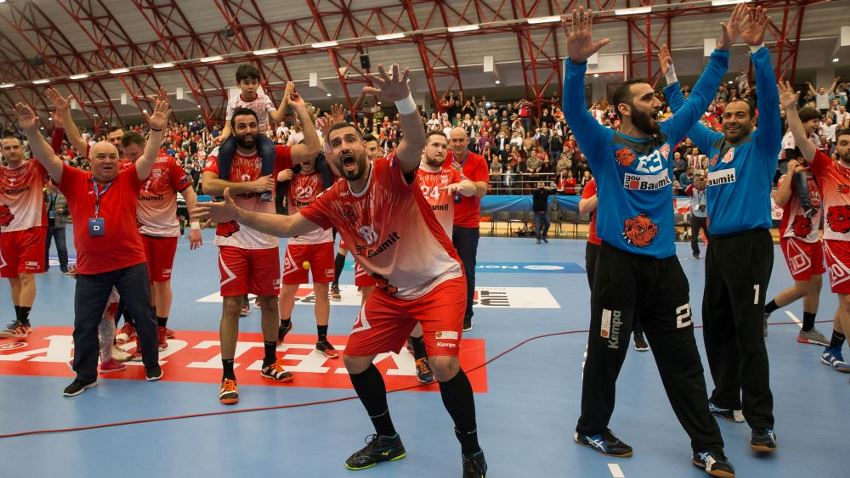 Buoyed by 2,500 raucous fans, Dinamo Bucuresti reached the Last 16 phase of the VELUX EHF Champions League for the first time in their history, after winning the second leg of the elimination game against Sporting, 26:24. With a 52:49 aggregate win, the “Red Dogs” secured their place between the best 16 teams in Europe and secured their 11th win in 12 games on their home court.

One year ago, Dinamo were left scratching their heads, after Sporting beat them twice by one goal in the same phase of the competition. The experience helped the Romanian side grow and Dinamo were already a goal up after the first game between the two sides in Portugal, 26:25.

They knew a good start is key and acted on it, as they opened an early 3:1 lead, after goalkeeper Saeid Heidarirad saved two penalty shots, including one from Romanian right wing Valentin Ghionea, who played for Dinamo in the 2005/06 season. As Dinamo’s back line was expertly blocked by the Portuguese side, Egyptian line player Mamdouh Shebib scored three of Dinamo’s first five goals.

But Dinamo had a problem: their tough defence that yielded three penalties in the first 18 minutes, including a red card for their top scorer, Croatian left back Ante Kuduz for a foul against Carlos Ruesga. Yet Dinamo were undeterred.

Despite Sporting’s line player Luis Frade scoring at free will – four goals in the first half – the Romanian champions held their ground to take a 13:10 lead after 26 minutes. But when Sporting lost Frade for another red card, it looked like it was game over for the Portuguese side.

However, the Portuguese side enjoyed the better start of the second half to tie the game, 14:14, only to be left frustrated once again by Heidarirad’s superb saves. On the back of the Iranian’s three saves, Dinamo built another 3:0 run, but the drama was far from over.

Sporting had their 3:0 own run to match the Romanian side, as the qualification stood on knife’s edge with 10 minutes to go, 20:20. But the nerves got to the Portuguese side in crunch time, as the noise in the Dinamo Arena was unbearable.

There were misunderstandings in attack for the Portuguese side, while their defence collapsed, as Dinamo had another 3:0 run that sealed the deal, powered by left wing Alexandru Asoltanei, the game’s top scorer, with seven goals.

With their 26:24 win, Dinamo became the first ever Romanian team to qualify for the Last 16 phase of the competition, where they will face PSG Handball, the second-placed team from Group B.

Dinamo coach Stefan Constantin said: ”It is a magical night with a magical victory! We made history in Romanian handbal. Was two very intense marches with Sporting. Last year we lost, but this time we got revenge. What will happen next is bonus for us. We have nothing to lose with PSG”