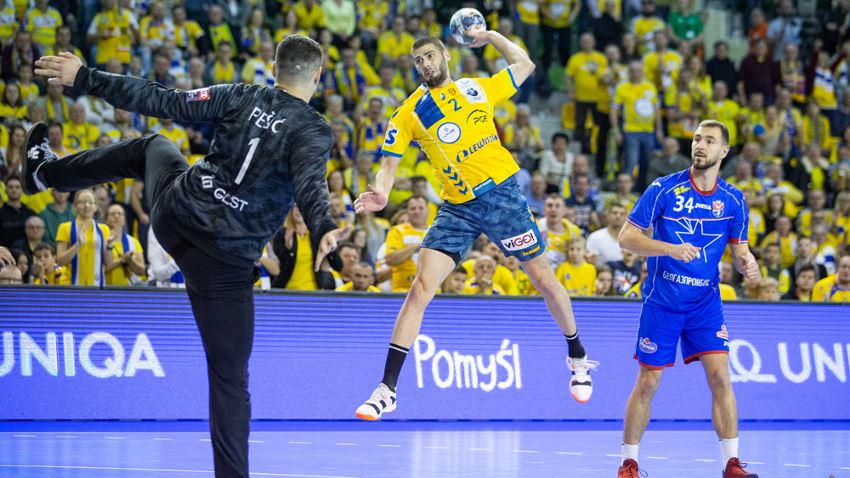 Kielce and Kiel both victorious after strong second halves

For 45 minutes, Kielce and Brest went toe to toe, but the Polish side had depth and a better roster to clinch another win, 30:24. Meanwhile, Kiel made a huge comeback to seal a vital two points against Montpellier, 33:32, after leaking 19 goals in the first half.

Kielce were favourites to take the win, with Brest having won only one of their last 18 VELUX EHF Champions League away games. However, the visitors came back from Kielce’s early 2:0 lead to take a 6:3 advantage after 12 minutes.

Kielce centre back Igor Karacic then led the charge to put the Polish side in front and the home team led 12:11 at the break.

In the second half Kielce were superior, particularly in the last 15 minutes when Kielce pulled away with a 5:2 run to a 24:21 lead, ultimately winning 30:24.

Despite the loss, Brest right wing Darko Djukic said he thought they could still progress to the Last 16.

"We have four matches left until the end and I think we can advance, we will work to do this," Djukic said.

Kielce coach Talant Dujshebaev added: "It’s really hard to play when the whole world says that we are the favourites. For me, teams such as Meshkov Brest and Motor Zaporozhye are on a very high level and in the top 16 in Europe. Huge respect to them."

After a strong start to the season Kiel have faltered in the past few weeks - although few would have predicted that their usually strong defence would concede 19 goals in 30 minutes against Montpellier.

Yet by the break a total of nine Montpellier players were on the scoresheet and their back line in particular had been superb, giving them a commanding 19:16 lead.

The main change in the second half from the hosts was an improvement in defence, while their attack replicated a fairly solid first-half performance.

With Nikola Bilyk and Niclas Ekberg scoring eight and seven goals respectively, Kiel took late control and the lead, 28:27, with 10 minutes to go.

Montpellier kept fighting back, pulling level again at 31:31 after briefly trailing by two goals at 29:31. But when Bilyk scored with less than 40 seconds left on the clock and Niklas Landin saved Gilberto Duarte’s last-seconds shot, Kiel took a 33:32 win to maintain top spot in the group.

Kiel coach Filip Jicha said he was proud of his team, adding: "They put an amazing effort into this game. Montpellier attacked very well, so it was an intense match. In the second half we stepped up against opponents who played at an extraordinarily high level."