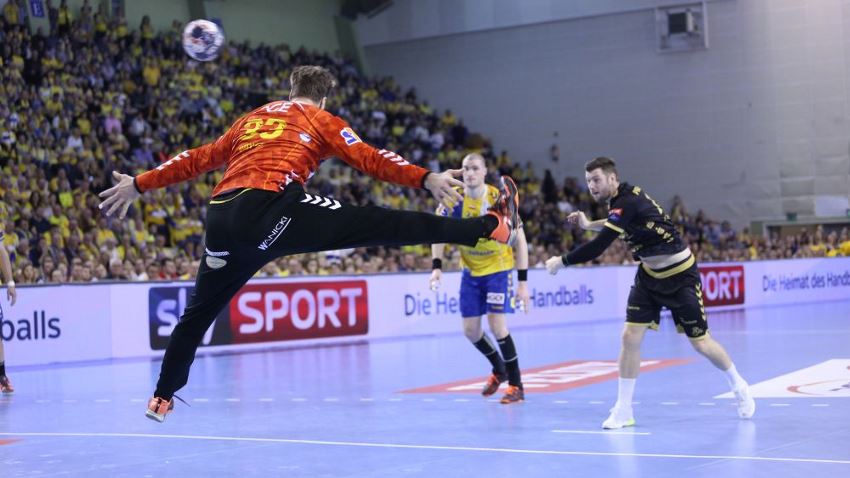 Having not led before the 59th minute, PGE VIVE Kielce had to sweat until the dying minutes of the game, but they became only the eighth team to earn 100 wins in the VELUX EHF Champions League after their 32:30 win against THW Kiel.

Hungarian powerhouse Telekom Veszprém finished the group phase with a dominating 32:22 win against HC Motor Zaporozhye, while Montpellier handed Vardar their eighth loss of the season.

Meanwhile, Porto were back at their best, using an early 7:1 run to dispose of Meshkov Brest, 35:32, who failed to make the Last 16 for the first time in five seasons.

Knowing that they could secure third place with a win, Kielce faced a crucial game.

Yet Kiel, the group winners, who were coming off a loss last week against Brest, needed to bounce back before an extended break in the VELUX EHF Champions League.

With six lead changes in the first half and some high-quality handball on display, the two sides traded blows from the throw off, but Kiel were more assured in attack than Kielce, who committed more turnovers.

On the other side, Swedish duo Niclas Ekberg and Lukas Nilsson combined for 10 of Kiel’s 18 goals in the first half, as the German powerhouse enjoyed a 18:16 lead after 30 minutes.

However, as goalkeepers Andreas Wolff and Niklas Landin started to get into their groove, the game slowed down a tad in the second part.

Wolff, Kielce’s summer signing from Kiel, took centre stage with a pair of saves, but Kiel still led 22:18 after 38 minutes.

But as Alex Dujshebaev found his form, scoring four times in eight minutes, Kielce tied the game, 26:26, with 10 minutes to go.

It looked like Kiel’s game to lose – and that was what transpired. Kielce finished with a 3:0 run in the last three-and-half minutes to silence the German side, securing a 32:30 win and becoming only the eighth team to record 100 victories in the VELUX EHF Champions League.

THW Kiel left wing Rune Dahmke said: "We came to win but in the end we are disappointed. We had a chance to try some things that we didn’t have an opportunity to work on before. Kielce deserved to win and I hope we see each other again."

For seven minutes, Motor hoped that Veszprém, who had already sealed second place in the group with last week’s win against Brest, could be surprised – but they were wrong.

The Hungarian powerhouse had early trouble in attack, trailing 4:2 after seven minutes, but they were unstoppable once they got back on their feet. With goals from seven different players, Veszprém built a 12:2 run to turn the tables and jump to a 14:6 lead.

In particular, Serbian playmaker Petar Nenadic was in good form, scoring three goals and assisting for three others, as Motor’s defence – which had conceded the most goals in the VELUX EHF Champions League group phase – found nothing that could stop Veszprém.

With a 74 per cent shooting efficiency in the first half, Veszprém were already nine goals up, 17:8, as the top scorer in Europe's premier competition, Motor playmaker Barys Pukhouski, had an off night.

In the debut match of their new coach, Gintaras Savukynas, the Ukrainian side never found their rhythm in the second half.

Veszprém had 11 different court players on the scoresheet, with the Hungarian side converting 63 per cent of their shots on their way to their 10th win of the season, 32:22.

The Hungarian champions finished second in the group and will meet Polish side Wisla Plock for a place in the quarter-finals, while Motor finished last in group B after their worst season in the VELUX EHF Champions League.

"We knew that "Motor" is now undergoing a period of change, and we were preparing hard for this meeting. I congratulate my guys on the victory. Mathematically, we still remained in second place in the group stage. We fought to the last," said Veszprém head coach David Davis on his side's win.

Vardar’s woes were duly documented: since their 33:31 win against Montpellier in round 1, the title holders lost two crucial players: backs Dainis Kristopans and Pavel Atman.

But their determination was still present, and despite right wing Ivan Cupic playing as a makeshift right back, the Macedonian side was superb in attack and their defence was much improved from previous games.

It was not surprising that Vardar took a 5:1 lead – which forced Montpellier coach Patrice Canayer to take an early timeout.

But when Vardar’s attack dried up, Montpellier used a 5:1 run to tie the game, despite Vardar’s 19-year old goalkeeper Marko Kizic recording six saves in the first 15 minutes.

It was a cat-and-mouse game, with both sides pulling punches, yet left wing Hugo Descat once again shone for Montpellier, scoring four times in the first half, as the French side had the slightest of leads at the break (14:13).

Montpellier’s defence got some important stops and with Hugo Descat once again in flawless form, Montpellier started to build a healthy lead.

It was no surprise, therefore, that Montpellier opened an unassailable 28:23 lead with 11 minutes to go.

A 4:0 run, spurred by a visibly hampered Sergei Gorbok, who finished the game with six goals, brought Vardar back into the game, 28:27.

Despite Vardar’s best efforts, there was nothing the Macedonian side could do to prevent their sixth loss in the last seven games.

Montpellier earned their eighth win of the season, 31:27, as Vardar lost their eighth game to finish sixth in the group.

“It is always a pleasure to play and win against Vardar. It's a team with great tradition. It was not easy for us to win tonight, but I think we came in with a great desire to win and did our best. I would also like to emphasize the performance of the young goalkeeper Kizic who has performed well today as in previous matches," said Montpellier centre back Diego Simonet.

"We have mixed feelings because on one hand I am saddened by defeat today, but on the other hand, I am happy to work with such guys and also for goalkeeper Marko Kizic who has been great defensively in three Champions League matches," said Vardar coach Stevce Alushovski.

Despite failing to reach the Last 16 phase for the fifth year in a row, Meshkov Brest wanted to win to please their fans.

Even though Meshkov Brest scored first, Porto soon enjoyed a 7:1 run on the back of Brest’s shooting efficiency dipping to 30 per cent.

21-year-old left back Andre Gomes was the fulcrum of Porto’s attack, scoring four times in the first 15 minutes, but it was their defence and goalkeeper Alfredo Quintana which shone.

Brest scored only once between the fourth and the 15th minute, allowing Porto to build a healthy 10:4 lead – but the game was not over.

Led by Slovenian playmaker Jaka Malus, who scored 10 goals in the match, Brest cut the gap to four goals at the break (17:13).

The Belarusian side enjoyed a bright start to the second half and cut the gap to only two goals, but a 4:1 run saw Porto run away again to 23:18.

With 11 players scoring at least two goals, Porto’s attack was impossible to stop, as Brest had no answer for their seven-on-six superiority.

Brest's main problems were that their defence was too passive at times and that they failed to create clear-cut chances in attack.

The Belarusian side lost their 10th game this season, 35:32, and failed to progress to the Last 16 phase for the first time in five seasons.

On the other side, Porto finished the group with two wins and from fifth place they can continue to dream. The Portuguese side will face either Aalborg or Flensburg in the Last 16.

"We came here to win. Both teams fought for two points. It turned out a good match, but Porto were stronger in many components. We showed high efficiency in both defence and attack," said FC Porto goalkeeper Tomas Bauer.