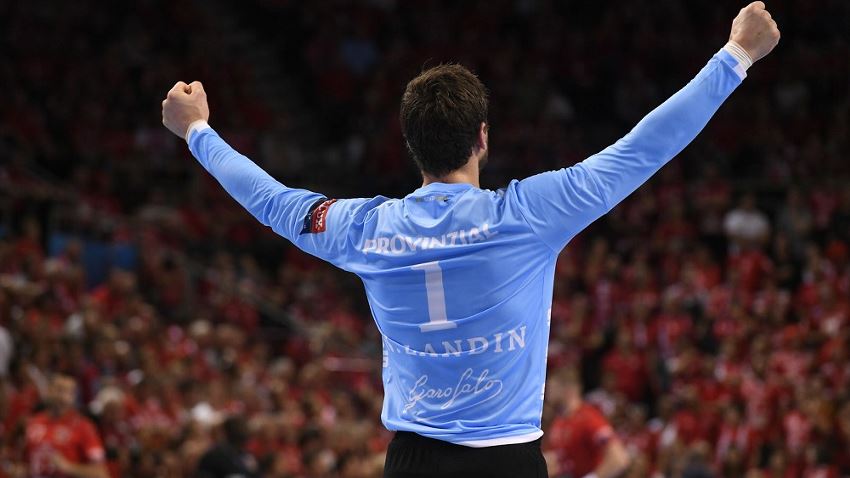 Landin: “We want to win our next trophy on the court”

Last season he won the EHF Cup for the second time. In 2019/20, Niklas Landin (31) and THW Kiel are back where they belong – in the VELUX EHF Champions League.

The Danish goalkeeper, one of three team captains of the ‘Zebras’ alongside Domagoj Duvnjak and Patrick Wiencek, are even through to the postponed VELUX EHF FINAL4 in December.

Landin is proud to be among the nominees for the VELUX EHF Champions League 2019/20 All-star Team, presented by Gorenje.

The Danish Olympic, World and EHF EURO champion speaks to ehfCL.com about the nomination, the COVID-19 hit season and his ambitions for his return to the LANXESS arena in Cologne in December.

ehfCL.com: You were nominated for the All-star Team by the coaches of the participating clubs. Does this make your nomination even more special?

Niklas Landin: It is always very special to be nominated for a Champions League All-star Team, it feels great and I feel honoured regardless whether I was nominated by coaches, fans or players. It proves that you played a top season in the most important international competition.

ehfCL.com: But mainly it proves that you and your team are back…

Niklas Landin: Yes of course, it was brilliant to win the EHF Cup last year, but it is always the ambition of THW Kiel and me to be part of the Champions League. So I am happy to be back.

ehfCL.com: Kiel are the winners of a tough group – do you agree that THW were stronger than expected?

Niklas Landin: Yes and no. It was our main objective to finish on top of this group, but at the start of a season you never know if it works. Mainly our away victories at Veszprém and Vardar were positively unexpected. But on home court we had some bad matches, such as the defeat against Porto or the draw against Zaporozhye.

ehfCL.com: Was the away victory at Veszprém a boost for the rest of the group phase?

Niklas Landin: It was a really good match, and I had never won at Veszprém before. It is a rare happiness for any handball player to snatch the points from Veszprém, so yes, this match was special and a kind of boost.

ehfCL.com: Due to the COVID-19 pandemic, the Last 16 and the quarter-final had to be cancelled and Kiel are among the four teams confirmed for the VELUX EHF FINAL4 in December. How does it feel for you?

Niklas Landin: It is a strange situation for everybody on the globe, and I really hope that it happens only once in a lifetime. First the German Bundesliga was terminated, then we got the ticket to Cologne – it all feels strange and surreal.

A post shared by Niklas Landin Jacobsen (@niklaslandin) on

ehfCL.com: Kiel were awarded the German championship by a league’s decision. Another unique moment in your career?

Niklas Landin: It was even stranger. You always want to become champions, but you want to become champions on the court, maybe thanks to a victory in the last match, together with your teammates. Now I am German champion for the first time and I was informed about it when I was playing at home with my kids. No party with the team and the fans, simply a video conference with players and coaches – and all at their homes. We definitely want to win our next trophy on the court.

ehfCL.com: After three editions without German teams, Kiel are back at the VELUX EHF FINAL4. They also were the last German team there, in 2016…

Niklas Landin: … and it was my first ever EHF FINAL4 in Cologne. Though we lost the thrilling semi-final it was a huge experience for me, the atmosphere was simply brilliant, and I hope that it will be the same this year. And, of course, we are proud to be the next German team again.

ehfCL.com: How have you coped with missing the main round of the EHF EURO 2020 with Denmark as defending World and Olympic champions?

Niklas Landin: I immediately returned home to my family to realise what went wrong. We lost by one goal against Iceland, tied with Hungary – and then were out. We had hoped for a re-start in the main round, but when you play three matches like those you do not deserve to be in the next stage.

ehfCL.com: What is your daily life like now during the lockdown?

Niklas Landin: I am in Denmark at my summer house with my family, right at the coast, with a view towards Kiel. I do not see the city of course, but I always look in the direction.

ehfCL.com: In terms of family – how important is it for you to play in the same team with your brother, Magnus?

Niklas Landin: It feels good as I can control him easier… No, to be honest, I left home when I was 16, 17 years, and Magnus was 10, 11. So it is really good to have him around, as a teammate, as a brother and as an uncle for my kids. For my son, Magnus is the biggest idol…

ehfCL.com: …so he will be a wing player?