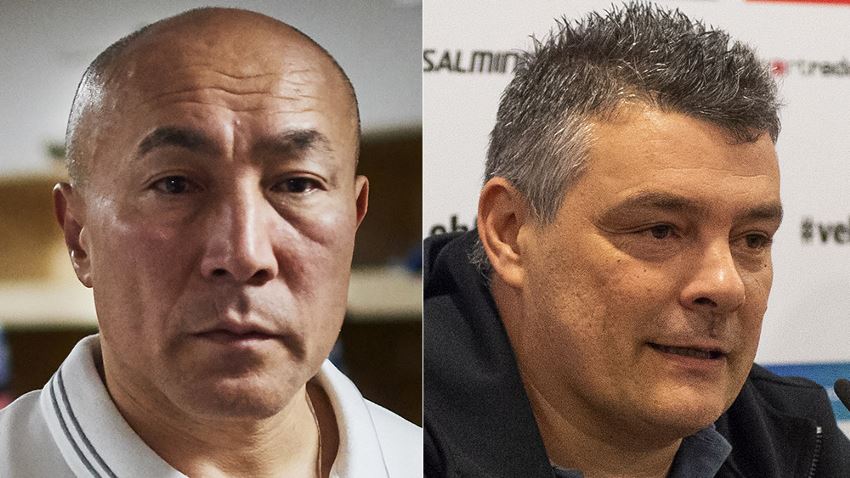 Dujshebaev and Pascual give their EHF EURO verdict

They have won a total of six VELUX EHF Champions League trophies as coaches, and they are definitely legends on the bench.

ehf-euro.com talked to the coaches about their players, Spain’s chances after reaching the semi-finals, and the tournament in general.

ehf-euro.com: A total of 11 Barça players are or were playing at the EHF EURO – how do you rate them, Xavi?

Xavi Pascual: They all play well, as far as I saw the games, they play key roles in their national teams. But of course, most of them have a really tough year ahead, with qualification tournaments for the Olympic Games, then the Olympic Games, if they make it.

ehf-euro.com: No other VELUX EHF Champions League participants have more players at the EHF EURO 2020 than Kielce with 12. Does this fact make you proud or afraid, as almost nobody’s home at the training sessions?

Talant Dujshebaev: It proves that we have a really strong team with ambitious top-class players in the best European national teams in all positions. This time, many of our younger talents, such as the Belarusians Artsem Karalek and Uladzislau Kulesh, or the Montenegrin Branko Vujovic are part of this EHF EURO. They can learn so much here, which then hopefully pushes the club on. I am very satisfied with all of them.

ehf-euro.com: But the focus is more on your sons Alex and Daniel, who play for Kielce, and the whole Spanish team?

Talant Dujshebaev: Alex and Dani are playing quite well, we are in constant contact, but this does not mean that I tell them what they should do on court. They have a coach, a good coach. I just phone them as a father, not as a coach.

ehf-euro.com: Two years ago, Alex became EHF EURO champion, the one and only major title missing from your own career as a player. How did you feel when your son passed his father in this perspective?

Talant Dujshebaev: I was so proud of him. I was twice an EHF EURO finalist, but never won gold. He won silver in 2016, two years later he was on the podium. It was a great moment for me as his father.

ehf-euro.com: And what about your opinion on the Spanish team so far?

Xavi Pascual: They play two impressive defence systems – 5-1 and 6-0 – which makes it really hard for every opponent to play against them. Backed by this strong defence, Spain scored many counter-attack goals, and when they play fast, they are almost unstoppable.

Talant Dujshebaev: Yes, Spain are really strong, they have the right character in the team. Now they have a chance to do something great again. On Wednesday, they have a crucial match against Croatia, which will decide the top position in this group. And this is really important, as neither of them want to face Norway in the semi-final. But as usual, all four semi-finalists start with the same chance of 25 per cent.

ehf-euro.com: 2002 was the last time a defending European champion successfully defended their title. Has the time come for Spain to change this?

Xavi Pascual: So far, Norway, Croatia and Spain play the best handball at this tournament. But this means nothing in a semi-final. Ten weak minutes or one wrong decision can end all hopes in a knock-out match and you can lose everything. Those three teams are on an equal level; making it to the semi is only one step, but not the last one.

ehf-euro.com: In general, what have you liked most about the EHF EURO 2020?

Talant Dujshebaev: The whole tournament is a huge success for the EHF. It is great to have three hosting nations, as then you have a huge handball interest in all of those countries. The arenas in all venues are almost sold-out, the atmosphere is great. It is the right concept to seed teams such as Croatia in Graz or Denmark in Malmö.

And I really appreciate having 24 teams taking part in the EHF EURO, as this proves that handball is growing all over Europe. Eight more teams fight for the trophy, and some of them really impressed me. And talking about the workload for the players, the implementation of additional rest days really increases the level of the event.

Xavi Pascual: For example, Portugal have had a great tournament despite their latest defeats against Iceland and Slovenia. Hungary have some young, fresh faces in their squad. As Talant says, those new teams push European handball forwards.

Looking at the early exit of the favourites Denmark and France I have to say that European championships in an Olympic year are special. Like France in 2012, Denmark were already qualified for Tokyo as World champions, this might have had an impact. In general, the top of European handball gets closer and wider. Now, you can lose any match against any opponent, if you do not take it seriously.

ehf-euro.com: Finally, do you think you'll meet again in Cologne, fighting for the VELUX EHF FINAL4 trophy at the end of May?

Talant Dujshebaev: Every time I meet Xavi and Barcelona it is great for me, and to see each other in Cologne would even be better. But the way there is really, really long.

Xavi Pascual: I fully agree with Talant. Up to 12 teams hope to make it to Cologne. Since the level of European club handball has also increased, it is a huge success to make it all the way to Cologne, the road there is getting more difficult every year. And when you are there, everything can happen. But of course, it would be great to qualify for the VELUX EHF FINAL4 and see Talant and Kielce there.