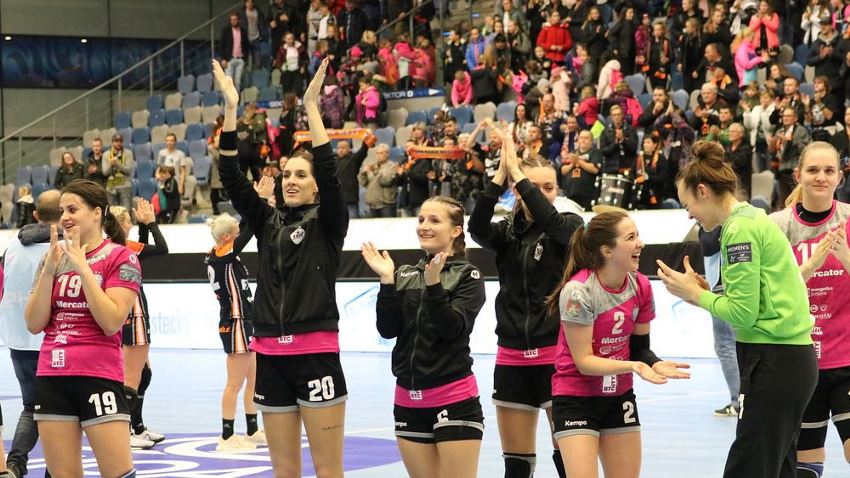 Krim’s unstoppable attack triumphant against Most

Krim’s excellent attacking efficiency helped them to win against DHK Banik Most in the fifth round of Group D matches in the DELO WOMEN’S EHF Champions League. Despite the loss Most still have the chance to advance to the Main Round, however they need to gain at least one point at the Hungarian powerhouse, Győri Audi ETO KC, while the pink-shirted Slovenian club’s fate is in their own hands. With a win against IK Sävehof they will surely secure their spot in the next stage.

The teams started toe-to-toe however the Slovenian champions were always slightly ahead thanks to Nina Zulic, who scored 6 in the first half alone.

Most tried to take control of the game but many turnovers and bad shots made it impossible. Nothing changed in the second half from the hosts’ side as they tried to bounce back. Moreover, the two-time Champions League winners could increase the lead and went up by 5 in the 37th minute.

Jiri Tancos, head coach of the winner of the Qualification Tournament, called every timeout available to him to try to find the best line against the visitors, but could not find the answer. Even though Alja Varagic, the best scorer in the Champions League from Uros Begar’s squad, got a red card in the 47th minute, Most could not turn their luck around.

As the home team did not come any closer, the winner was known long before the final whistle. Most will face the title holder Győri Audi ETO KC while Krim host Sävehof in the last round of the Group Matches in DELO WOMEN’S EHF Champions League.

Uros Bregar, coach of RK Krim Mercator, put the win down to good preparation, "Banik Most show their qualities during the first game in Ljubljana, where they won, so this time we prepared really hard for this match for almost three weeks. We knew where their strenghts are so we focused on defence and were succesful. Nina Zulic was the key player from our team this evening."

On the other side, Most coach Ondrej Vaclavek, highlighted his side's technical errors despite a good showing from his goalkeeper, "We need to congratulete the winner, our goalkeeper Dominika Müllnerová, was our key player this evening, and it was her work that meant we never lost more than 4 or 5 goals during the game. Our problem this time was that we made 22 technical mistakes during the game, which is too much for the Champions League."