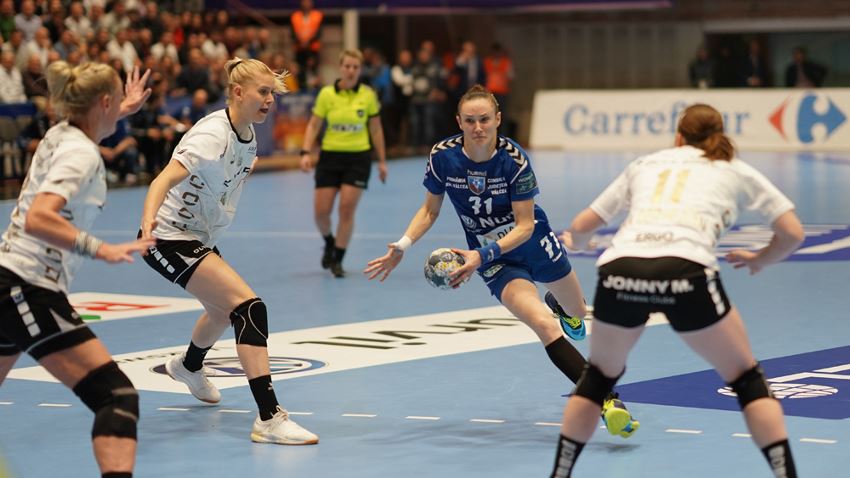 There were patches when Valcea felt fragile, but a superb attacking performance, with the back line scoring 17 goals, helped the Romanian champions secure a dominating win against Bietigheim, 34:27, in their comeback to the DELO WOMEN’S EHF Champions League.

Valcea was living and breathing handball again and a full house was there to witness the city’s return to the DELO WOMEN’S EHF Champions League after Oltchim’s demise six years ago.

And there was a lot to be proud of, as the hosts’ attack clicked at the right time to produce seven goals over the first eight minutes, as Valcea took a 7:5 lead, with playmaker Alicia Fraga Fernandez pulling all the strings, scoring twice and dishing two assists.

There was also goalkeeper Yulia Dumanska, who pulled off four incredible saves in the first 20 minutes to help create a flurry of fast breaks that maintained Valcea’s difference, 12:9.

QUICK-PICK: #SGBBMBietigheim's @MalesteinAngela does her very best to keep her side in the game against #SCMRamnicuValcea, but will it be enough?

But when Valcea’s attack slowed and their defence shut down, Bietigheim roared back. A 5:1 run after a well-taken time-out by coach Martin Albertsen turned the game on its head, as the German side took the lead for the first time, 14:13.

There was little defence played by the two sides until the break, as the high-octane, intense action saw Valcea ride their luck and eventually take back the lead, 20:18, enjoying a superb 80% shot efficiency.

Boasted by a 5:1 run to start the second half, spurred by Brazilian back Samara da Silva, Valcea took off and never looked back.

Always finding the key to unlock Bietigheim’s defence via their powerful backs, the hosts enjoyed a superb comeback to the European premium competition, with their raucous fans given an offensive treat.

Valcea led by as many as seven goals in the second half, yet their lack of depth and experience brought back Bietigheim in the game.

Led by Dutch back Laura van der Heijden, who scored eight times, the German side attempted to mount another comeback, but their efforts were quashed by the seven saves made by Valcea’s goalkeeper, Marta Batinovic, as the hosts coasted to a 34:27 win.