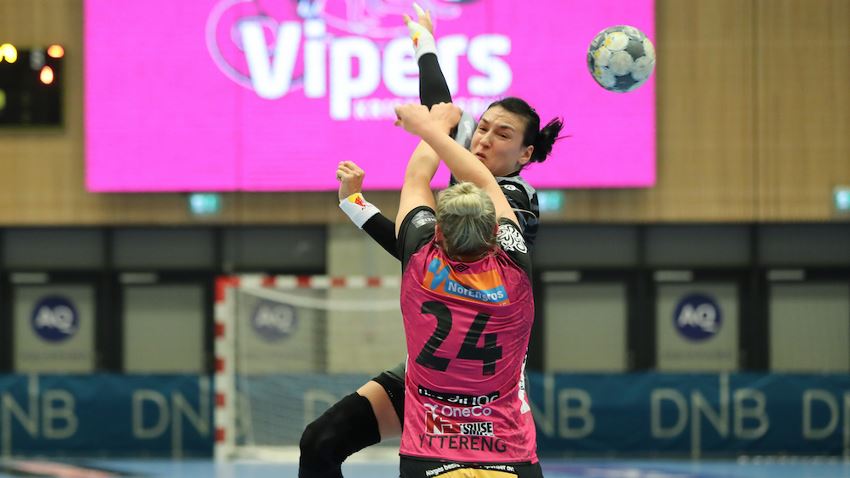 Neagu and Vyakhireva shine as CSM and Rostov snatch the points

Prior to their match, Vipers Kristiansand and CSM Bucuresti were level on five points, and their double header clashes – on Saturday night and in the next round of the DELO WOMEN’S EHF Champions League – may play a crucial role in the fight for the quarter-final spots.

The match in Norway was extremely tight, and thanks to a strong comeback in the last minutes, CSM won 25:23.

In the two previous seasons, Rostov-Don and FTC-Rail Cargo Hungaria had faced each other in the DELO WOMEN’S EHF Champions League quarter-finals, and the Russian side won all four games. On Saturday night, Rostov claimed another victory and provisionally went to the top of the group 1 table – however, either Metz Handball or Team Esbjerg are certain to leapfrog them on Sunday.

Cristina Neagu, who returned to the court last November following an absence of almost a year, seems to be back in brilliant shape. For the second straight DELO WOMEN’S EHF Champions League match, she scored as many as 14 goals, helping CSM to beat both Metz and Vipers and increase their chance for a quarter-final berth.

“We knew we had a tough job ahead of us today, as Vipers are a really good team. I am so proud of my girls today. We really believed that we could win, even when they were leading by three and four goals,” said CSM line player Dragana Cvijic. “If we can play like this in the coming games, other teams should be afraid of us, as this was a really, really big test that we managed to win.”

After losing both their previous matches in the main round, Vipers enjoyed a better start to Saturday’s game. Solid defence and Andrea Pedersen’s saves allowed the Norwegian side to score several goals from fast counter attacks and build a four-goal lead (10:6) midway through the first half.

CSM tried to hit back, and with Neagu scoring seven times before the break, the Romanian team cut the deficit to 12:11 at half-time.

Following a long chase, CSM finally drew level at 17:17 in the 44th minute, but in the next six minutes, they could not get past rock-solid Pedersen, and the home side took a 20:17 lead.

However, the visitors’ seven-against-six tactics in attack worked, and Neagu’s goals helped CSM to make an impressive comeback late in the match.

Eight minutes from the buzzer, Vipers were in front 22:18, before an excellent finish saw CSM grab the precious points as left wing Itana Grbic secured the two-goal result in the last seconds.

After missing two DELO WOMEN’S EHF Champions League matches due to injury, Anna Vyakhireva returned to the court and had a clear impact, scoring nine goals.

Together with Iuliia Managarova and Anna Sen, Vyakhireva was the biggest threat for FTC’s defence, who could not hold the Russian trio back during the first half.

Rostov were dominant from the opening minutes and led by seven goals (15:8) in the 21st before the home side cut the gap somewhat at half-time.

FTC gained momentum and capitalised on Rostov’s mistakes in the second half. Led by Katrin Klujber in attack, the home team enjoyed a good run between the 38th and 44th minutes, moving the score from 25:20 to 26:26.

Then Vyakhireva missed a penalty shot and Aniko Kovacsics scored from seven metres to put FTC in front, before Rostov’s goalkeeper Mayssa Pessoa spectacularly drew level off a long-range shot from her own half.

The visitors pulled in front again, but just three minutes from full-time, Klujber cut the deficit to 32:31. However, Rostov scored three unanswered goals in the remaining time, thereby celebrating their second straight main round victory.