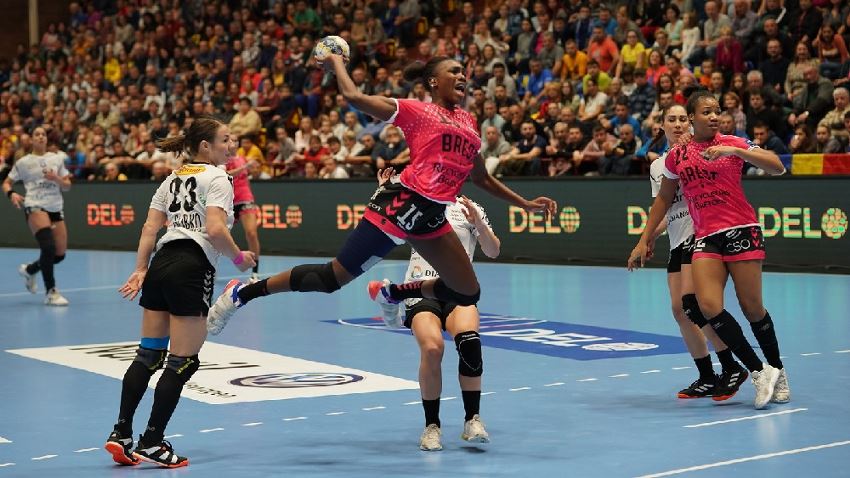 Six talking points after the end of the group matches

It is time to draw up the first balance of the DELO WOMEN’S EHF Champions League 2019/20 season now the group matches are over.

Four teams are out and continue their journey in the Women’s EHF Cup, while the main round contains nine sides from last season, with other hungry teams competing for a quarter-final berth.

We also take a look at the best attacks and defences and find out why Györ and Brest are the only teams with a six-game winning streak in the competition.

How is the maths before the start of the main round?

Among the 12 teams that proceeded to the next phase are two each from Hungary, Romania and France, as well as one from Norway, Russia, Denmark, Montenegro, Sweden and Slovenia. There were no big surprises as the best-seeded teams progressed - except for Bietigheim, who were always going to have a hard time after losing in the round to Ramnicu Valcea by a seven-goal margin.

It may sound predictable, but the favourites are getting more experienced and know the recipe to proceed – a great home performance, coupled by at least a draw in away games to succeed. But the real battle begins now: in group 1, Metz are first with six points, followed by Vipers and Rostov both on five, with Esbjerg and CSM looming. The top two in group 2, Györ and Brest, have already opened a four-point gap over Buducnost, and a six-point advantage over Krim and Sävehof.

Getting deeper into the quarter-final picture, Metz, Rostov, Buducnost, Vipers and Györ are still looking the favourites, while Brest turned the tide. The French side got only three points from 12 matches last season, but they are already on eight points at the start of the main round.

How can CSM improve their attack?

The saying goes that a title is won with the defence, yet the attack still has to share the burden if a team is to be successful. There are exceptions to the rule, but CSM Bucuresti are not one of them, as the Romanian side finished third in their group, after a four-game unbeaten streak to be followed by two consecutive losses. However, CSM showed grit and promise in defence, conceding only 131 goals in their first six games, or an average of 21.83 per game, the lowest in the competition. However, the Romanian side only scored 153 goals, as only two teams – Sävehof and Valcea – scored less to proceed to the main round.

In crunch games, CSM failed to score more than 24 goals in a game, even with Cristina Neagu on the court, and this will be an area of the game that the Romanian side is looking at ahead of the business end of the competition.

Can Györ sweep everybody until the EHF FINAL 4?

Györ’s unbeaten streak will stretch to two years in the DELO WOMEN’S EHF Champions League, as the Hungarian champions are still strolling through in this unprecedented series. For the second season in a row, Györ will start the main round with eight points after sweeping their opposition in convincing style.

Comparing their group matches results to last season’s, the Hungarian side have a similar goal difference (+69 now to +70 last season), yet they scored a record number of goals, 216, six more a year ago. The first serious test for Györ will be their next game against Brest, the only other team riding a six-game winning streak his season.

A perfect record for Brest: now can they keep up?

How long are Brest going to keep up this type of form? They managed to do practically everything: outscore opponents, surprise stout defences and even come from behind to score some unexpected points. Moreover, playmaker Isabelle Gulldén is slowly coming back into form and into the team, which means the French side can only get stronger and better.

Alongside Györ, they are not only the side who won all six games in the group phase, Brest are also the only team who scored at least 200 goals in the first six games of the season. Sure, they conceded 169 goals (28.1 per game), which is definitely an alarming rate for a contender, yet the ways they find to win will definitely make them a contender for a DELO WOMEN’S EHF FINAL 4 berth. So is this form sustainable on a long-term basis?

The need for experience in the competition

Finally the dust has settled, and four teams will exit the competition after six rounds. MKS Perla Lublin are the only team to have lost all their games, by an average of 10.6 goals per game. While Bietigheim and Podravka both won once, Most were the best of the last-placed teams with three points. Experience is key in such a competition and Most, who had a roster with a zero-game experience combined before the season’s throw-off paid the price. Lublin were also close to this situation, while Bietigheim and Podravka simply were drawn into group too tough for them to proceed to the main round.