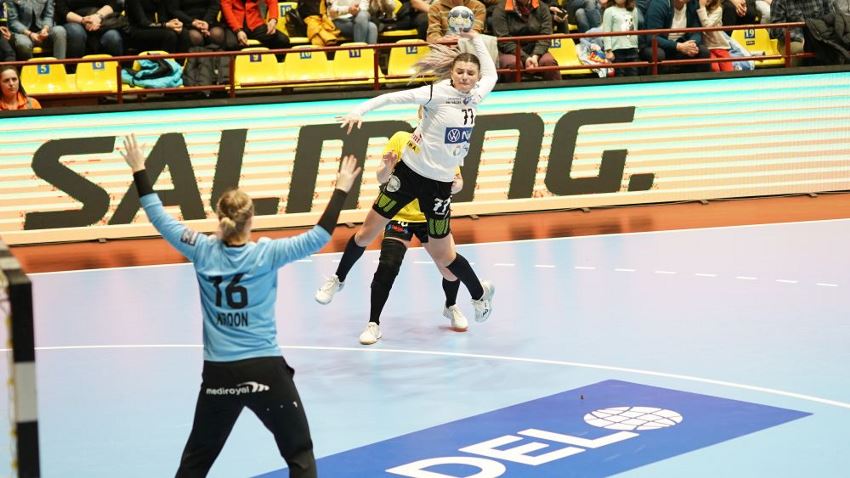 After SCM Ramnicu Valcea recorded their third win in five games in the main round of the DELO WOMEN’S EHF Champions League, all four quarter-finals berths have been decided in main round group 2

The Romanian champions steamrollered IK Sävehof, 28:20, and the Swedish side, who will will finish last in the group if they do not win next week against Brest, are now eliminated from the competition along with RK Krim Mercator.

With a strong attacking outing, Brest Bretagne Handball bounced back from their loss against Györ last week and enjoyed a thorough 37:26 win against Krim, which has secured at least second place in the group for the French side.

Valcea dominated Sävehof with their experience and depth in the first game between the two sides, but they knew what the stakes were on Saturday in the second game.

Therefore, as the Romanian side had a cautious approach to the game, Sävehof jumped to a 3:1 lead after three minutes.

But the hosts amped up their defence, goalkeeper Marta Batinovic started racking up saves and Valcea took control after a 4:1 run spurred by right back Mireya Gonzalez.

Gonzalez scored five of Valcea’s first nine goals and not even a timeout taken by Sävehof could weather the storm.

With Gonzalez and fellow back Kristina Liscevic combining for 10 goals in the first half, Valcea took a comfortable 16:10 lead at half-time.

The Swedish side needed to improve their meagre 43 per cent attacking efficiency in the second half if they were to save something from this game, but they failed to exert pressure on their opponents.

With the same stout defence that forced turnovers and missed shots from Sävehof, Valcea dictated the tempo, despite not impressing in attack.

As Florentin Pera gave chances to all of his players, including young talents like Diana Ciuca, Roberta Stamin and Alexandra Badea, the gap remained steady.

Ultimately, Valcea secured their quarter-finals berth with a 28:20 win, and they will finish fourth in group 2 and will face the winner from group 1 in the next phase of the competition.

After the painful loss against Györ last week, their first of the season, Brest went back to the drawing board and decided to go all-out attack and force Krim into mistakes from the throw off.

The French side scored five times in the first four minutes to jump to a 5:2 lead, with former Krim right back Ana Gros in fine form, scoring three times.

As Valcea had already won against Sävehof, Krim’s chances of progressing to the next phase were shattered and their motivation seemingly started to slip.

Their top goal scorer, Dutch right back Harma van Kreij, was once again in fine form, scoring four goals in the first half, but Brest were unstoppable in attack, powering to a 17:9 lead after 17 minutes.

Slight mishaps from Brest helped Krim cut the lead to only five goals at the break, 19:14, but there was no way back for the Slovenian side.

As there were few changes in the second half, there was little doubt about the winner.

With a superb 67 per cent shot efficiency, Brest dominated as Gros’s role was taken by line player Pauletta Foppa and left wing Coralie Lassource, with the French side opening a 10-goal gap, 31:21, with 12 minutes to go. 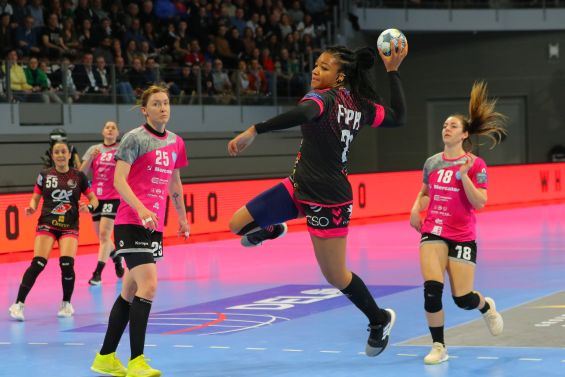 In the end, Brest failed to break their record of most goals scored in one game (39), but the 11-goal winning margin (37:26) is their second biggest in the competition.

Meanwhile, Krim are out of the DELO WOMEN’S EHF Champions League in the main round for the sixth time in the last seven seasons.

He said: "I have a lot of respect for Krim, who have been in the Champions League for many years. I am happy to have won this match because we are now sure of finishing in (at least) second place in the group, so we will play at home in the second leg in the quarter-finals.

"It is very important to eventually reach our dream of being at the Final Four," he continued.

Krim head coach Uros Bregar did not make excuses for their heavy defeat.

"We had some problems traveling and arriving in Brest, but that is no excuse. There were missing players in Brest – and despite everything they achieved a great performance and it shows the power of this team," he said.