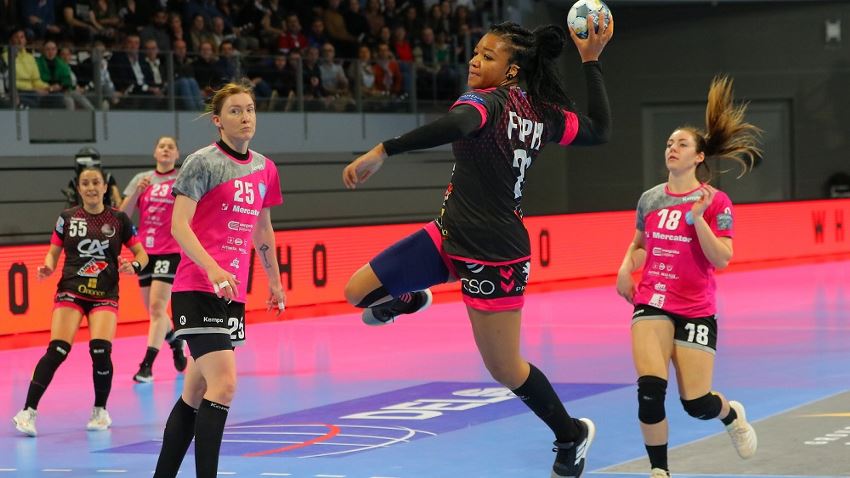 Foppa: “I would not have bet on us beating all those top teams”

Looking for a player who has shown how to reach top level in handball in less than two years? Pauletta Foppa might be your perfect choice.

Turning only 20 in December, the Brest Bretagne Handball line player has already made a name for herself.

She came into the eye of many at the Women’s EHF EURO 2018, when she lifted the trophy with France. It was her first taste of international handball, but she made the most of it. An experience that was an eye-opener for her.

“It still feels like I did not play much of a role during this competition,” Foppa said. “I was there to learn, and to make the most of the minutes I was given. There were things and tips that I use every day now.”

The success with the national team was a boost for her. Nobody was able to stop her going to the top.

"I felt we were up to something good"

With Brest, Foppa matched the very best teams on the continent this season.

“There were a lot of changes last summer, but I feel like all the girls in the squad clicked right away,” Foppa said. “I could feel during the preparation that we were up to something good. But I would not have bet on us beating all those top teams.”

EHF Champions League titleholders Györi Audi ETO KC were the only opponents that avoided defeat against Brest, a team that had been struggling in the competition in the previous season.

"It was a lot about confidence"

Brest’s 35:32 away win in the season-opener against Buducnost in Podgorica launched the machine.

“I think it was a lot about confidence. We saw we were able to compete with the best, and it was like a virtuous circle,” said Foppa, who scored 36 goals in total in Brest’s group matches and main round games.

With her teammates performing on a high level constantly, the young line player felt she got better and better - in only her second season in the EHF Champions League.

“I had a lot of playing time, but I also spent a lot of time watching my own games, trying to work out what I can do better,” she said. “Playing every three days, you sometimes have to rest your body but you can still progress in other areas.”

"So much left to achieve"

Due to the COVID-19 pandemic, Foppa has had every opportunity to rest her body in the last two months.

“It’s getting long,” she said, while the domestic season for her and her French teammates is over. “It is frustrating because it feels like we had so much left to achieve.”

A welcome boost during the time away from the handball courts came last week, when Foppa learned that she is among the five nominees for best player in the DELO WOMEN’S EHF Champions League All-star Team vote.

"I was shocked when I learned about my nomination"

“I was chatting with Coralie Lassource, and then she goes: ‘I’m nominated!’ and I was like really happy for her,” Foppa said. “And then Coco scrolls down and says that I’m in there, too. I actually could not believe it. I was shocked when I learned about my nomination.”

“It shows that I’m going in the right direction. I’m really pleased that the work has been paying off,” Foppa said. “And I do hope that I’m going to win the award, that would be even better.”