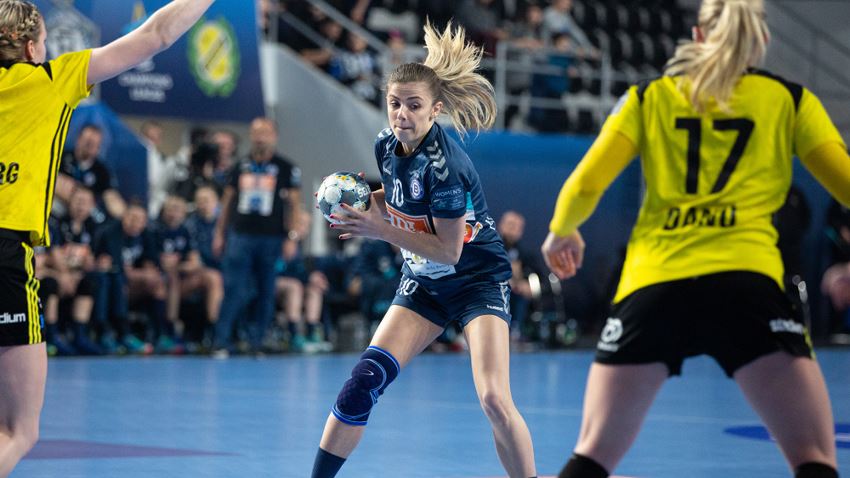 Romanian champions SCM Ramnicu Valcea enjoyed one of their biggest wins in the DELO WOMEN’S EHF Champions League, steamrolling Slovenian side RK Krim Mercator, 31:16. The Romanians now tie the Slovenians in the standings on two points in group 2 and who are still eyeing their first ever quarter-final berth in the competition.

And there was no stopping a relentless Buducnost attack for Swedish side IK Sävehof as the home side in Montenegro came out roaring in the first half and ended up winning by five (30:25).

If Valcea still dreamt of a quarter-final spot, then it was crucial that they ended their five-game losing streak from the group phase and despite the Romanian champions looking flawed in defence and with little spark in attack, they emerged as a team to be reckoned with, with an eye still on a quarter-final spot.

It took seven minutes and 43 seconds for Valcea to finally score their first goal of the game, as the Romanian side looked nervous, unable to break down the Slovenian defence, but from that point onwards, it was only Valcea who were on the court.

They stiffened up their defence, while in attack, playmaker Iryna Glibko got her magic back after a few indifferent months.

A natural born scorer, the 29-year old back had only managed to strike 20 goals past Valcea’s opponents in the group phase, but in this match alone, she scored nine times to lead Valcea her side to a superb win, their second of the season.

Krim simply were not good enough, missing 23 shots and turning over the ball eight times, as their attack crawled to a 34% shot to goal efficiency.

But Valcea disturbed the ball well and had 11 outfield players scoring at least one goal as they did not miss their goalkeeper, Yuliya Dumanska, who suffered an injury scare on Thursday and was rested.

The Romanians were already six ahead at the break (14:8) and never looked back, jumping to an eventual 31:16 win, one of their biggest ever in the competition.

On the other side, Krim came just close to scoring the fewest goals ever in the competition, as they only scored one more than their record, 15, set against Buducnost in 2014.

In search of their first DELO WOMEN’S EHF FINAL 4 berth in three years, Buducnost were already four points behind the top two teams in the group, therefore a win against Sävehof would be crucial if they were to stand any chance of progressing through.

Boasting seven players from the Montenegrin national team which finished fifth at the 2019 IHF Women’s World Championships in December, Buducnost aimed for a strong start and they did just that, despite not playing the game in the Moraca Arena, their usual stronghold, but in new arena, the Bemax Arena, situated next door.

With a fast tempo and the defence slowly getting together on the same page, the hosts jumped to a 6:3 lead, boosted by two goals scored by the top goalscorer of the competition in the group phase, Jovanka Radicevic.

😍 Take a look at how @Majda81337065 finishes this fast break goal for @ZRKBuducnost! What incredible skill to get the ball up and over the goalkeeper. #ehfcl #deloehfcl pic.twitter.com/4md2zqayti

With Radicevic and centre back Milena Raicevic in fine form, combining for 11 goals between them, Buducnost never let Sävehof reduce the gap to more than two goals, as they jumped to a 18:14 lead at the break.

In spite of Sävehof centre back Ida Staxen Lagerbon’s efforts with seven goals – five of them in the second half, including three in a row – the young Swedish side did not stand a chance against the experienced Montenegrin champions who earned their first win of the main round, 30:25.

“I'm generally pleased how we looked in the new arena,” said Buducnost coach Dragan Adzic. “There were a lot of spectators and they supported us with good energy.

“The first game after the break and big competition is always difficult for us, so the level of play was at the expected level, but the reaction of the team was good, and I believe we will be better in the next games.”

The Montenegrin powerhouse is still third in the group, with six points, while Sävehof are now in a three-way tie with SCM Ramnicu Valcea and Krim, on two points.