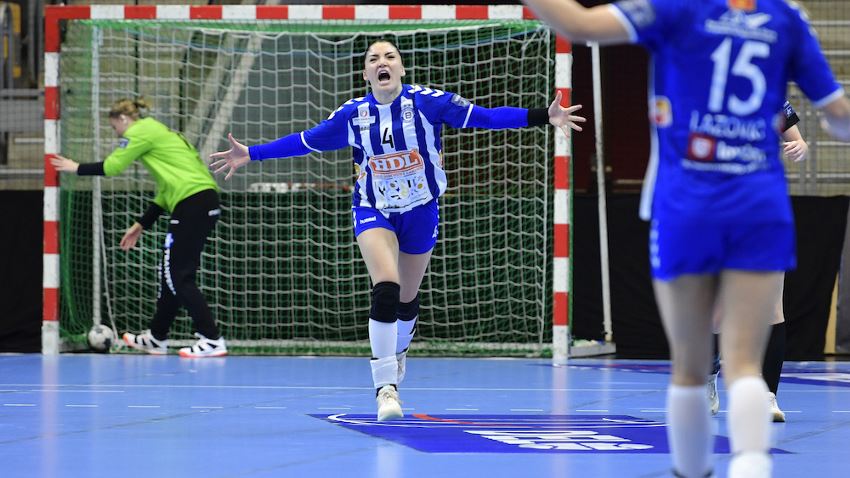 Buducnost secured third place in group 2 with their third win in the last four games, 33:24, against IK Sävehof in the opening DELO WOMEN’S EHF Champions League match on Saturday afternoon.

The Swedish side need a miracle to proceed to the Last 16, as their fate is now out of their hands, irrespective of potential victories in the last two games in the main round.

Elsewhere on Saturday, in a nerve-wracking game with eight lead changes, RK Krim Mercator and SCM Ramnicu Valcea shared the spoils when the deadlock was not broken after 60 minutes, 28:28.

With the youngest player to take the court in this year’s competition in the line-up, 16-year-old left wing Nadja Kadovic, Buducnost took a bet on the youth, but the visitors found themselves behind early, as Sävehof took an early 4:2 lead after seven minutes.

A 3:0 run from Buducnost, including a goal from Kadovic, turned the game on its head, as the Montenegrin side took their first lead, 7:6.

The game was far from over. A flawless 4:0 run fueled by Danish left wing Trine Mortensen took Sävehof’s attack to a superb 77 per cent efficiency and handed the Swedish champions a 10:7 lead after 17 minutes.

Producing their best half of handball this season, it was a question of whether Sävehof would manage to maintain the same rhythm in the last 30 minutes and protect their 17:15 lead.

However, their 77 per cent attacking efficiency was unsustainable throughout the game, as Buducnost amped up their defence in the second half.

With Buducnost finally getting into their stride, not even two timeouts called by Sävehof coach Rasmus Overby could save the Swedish team. Preventing Sävehof from scoring between the 35th and the 49th minutes was the key for Buducnost’s win, as the Montenegrin side built a 7:0 run to decide the game.

Backs Milena Raicevic and Djurdjina Jaukovic scored four of those seven goals to see Buducnost take anunassailable lead, 25:20, and Dragan Adzic’s side cruised to a 33:24 win in the end.

With 10 points after eight rounds, Buducnost have secured third place in the group, but they remain three points behind leaders Györ and Brest, who will face off on Sunday.

In the first game between the two sides, Krim only managed to score 16 goals and recorded one of their most lopsided losses in the history of the DELO WOMEN’S EHF Champions League.

With everything to play for against Valcea, the Slovenian side enjoyed a bright start to the game. Valcea found early trouble in attack due to the absence of injured playmaker Alicia Fraga Fernandez.

But fellow Spanish back Mireya Gonzalez was tasked with scoring from afar and she had a strong hand in Valcea’s 4:1 run that saw the Romanian side take a 7:4 lead after 17 minutes.

But – as their season was on the line – Krim replied with their own 4:1 run to tie the game. With backs Harma van Kreij and Alja Varagic combining for six goals in the first half, the hosts had a 13:12 lead at the break.

Facing a bug that affected the team, Valcea tried to find the strength to stay strong in the second half and mounted a 3:0 run fuelled by line player Asma Elghaoui to tie the game, 16:16.

Krim continued to rely on Dutch back Harma van Kreij and Alja Varagic – and the match ended in a 28:28 draw after Varagic converted a last-gasp penalty, earning Krim their first point on home court this season.

Krim stay in the hunt for a quarter-final berth, but they need at least three points in the last two rounds.