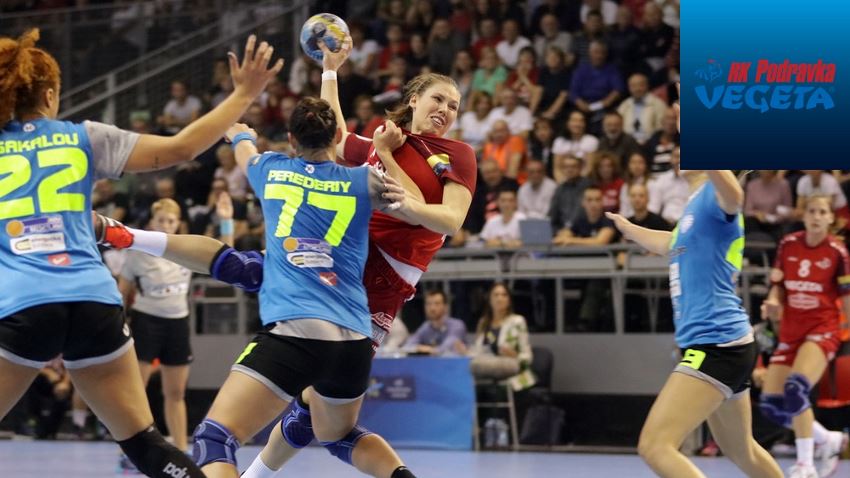 Podravka Vegeta have turned the page on the last season, when they started along a new path with Zlatko Saracevic on the bench. The appointment of Saracevic as head coach at the beginning of the 2018/19 season came as a surprise to many, as the 1996 Olympic gold medallist and respected Croatia national team player had previously only been involved in men’s handball. But for Podravka, his appointment was seen as having great potential to reach the desired new heights.

Podravka Vegeta, the proud Women’s EHF Champions League winners in 1996, had failed to reach the group matches for three straight seasons. In 2018/19, they finally got back on that track.

Boosted by several experienced newcomers, long-time stalwarts and new faces from their youth academy, Podravka made it to Champions League group matches, and later EHF Cup Quarter-finals. This season, Podravka Vegeta earned their spot in the DELO WOMEN’S EHF Champions League without having to play the qualification stage, proving that the work in the club is paying off.

With the new season, Podravka have the same goals and wish to show how much they are growing with each experience. In the small city of Koprivnica, the ‘home of women’s handball’, they will show their best against Metz Handball, Vipers Kristianstad and FTC-Rail Cargo Hungaria in Group A.

Three questions before the new season:

- How important is it for Podravka to be play the DELO WOMEN’S EHF Champions League?

Koprivnica is a small city in northern Croatia with a long handball tradition. The success of last season awoke handball lovers in the city, and it was the fans who led Podravka to victories in both the Champions League qualification and group matches, and the celebration of all domestic trophies in the end. Playing top-level handball is important to the club led by sports director and former Podravka Vegeta player Miranda Tatari Simunovic, as well as new director Vlatka Mihoci – another club legend. For this season, Podravka boosted their roster with experienced internationals, though there are still a number of long-time Croatian players as well as youngsters from their academy.

“We are thrilled to play the Champions League again. It is every players’ dream to play in the Champions League. The good thing is that we will play quality matches against high-quality opponents. With every match in this competition, all of us in the club can collect valuable new experience. You can grow as a player and as a person,” says team captain Dragica Dzono.

- What are Podravka’s chances in Group A?

Compared to last season, Podravka Vegeta had a little easier way in 2019/20. Without the qualification tournament, Zlatko Saracevic’s team had more time to focus on tactics and strength for the new season. Podravka’s first Group A match is scheduled for October 6, against Metz Handball. The group is not an easy one, but Podravka Vegeta want to show 100 per cent.

‘’We have very strong and respectable opponents in our Group A. Two teams are from last season’s EHF FINAL4 of the Champions League. Alongside those, there is the very strong Hungarian team FTC. We know that it will be very hard to play every match but we will try to give everything we have in this season for our spectators, atmosphere and, in the end, results,” explains sports director Tatari Simunovic.

Tatari Simunovic was one of the top Croatia national team players and a club legend. There is no doubt she can help everyone in the club with her knowledge and experience of playing at a high level. On the same page with the sports director is team captain Dzono: ‘’We are not afraid of anyone. We will enjoy playing against them! The group is very hard. Every team has the same ambitions, and that is to reach the main round.”

Podravka Vegeta have been crowned champions of Croatia 25 times, during which they have had a long-time rivalry with Lokomotiva Zagreb. Their objectives for the new season are almost the same as every year: The most important thing is to win the Croatian championship and Cup. As for the European competitions, there are no clear objectives, but the club wishes to go as far as possible.

‘’We have clear goals in Croatia – winning the championship and Cup. When it comes to Champions League, we wish to give our best on the court and we’ll see what happens. We are aware of the extremely hard group, but we play fast and good handball. We can deal with any team and our plan is to go match by match to come as far as we can,” says Tatari Simunovic.

Under the spotlight: Tjasa Stanko

After the departure of Alena Ikhneva, one of the most important Podravka players last season, a new face was welcomed in Koprivnica: Young Tjasa Stanko will take Ikhneva’s place at left back. The Slovenian international started her career at RK Zagorje and gained considerable experience with Krim Mercator. In 2018, Stanko was voted best young player in the Champions League. She will be a solid reinforcement for Podravka in the new season. All eyes will be on Stanko, as everyone is eager to see how the 21-year-old will develop. Last season, Stanko scored 57 goals in the Champions League. Although she is primarily a left back, Stanko can play on any back position.

Podravka Vegeta have a great season behind them. After the drama of the 2018/19 qualifiers, they fought hard in their Champions League group and had a strong showing in the EHF Cup. Their solid season in Europe was additional wind in the back for the competitions at home in Croatia. Podravka lifted their 23rd domestic Cup and – after 23 wins and just one defeat, against Lokomotiva – became Croatian champions for the 25th time. They are filled with self-esteem for the new season, and everyone in the city of Koprivnica is behind them.

Podravka Vegeta welcomed the new season with a new club director. After the departure of Bozica Placic, the seat was given to Vlatka Mihoci. The former Podravka Vegeta player worked for the club’s main sponsor, Podravka d.d., for many years. Mihoci played the Champions League finals in 1995 and, in 1996, scored the last goal in the finals to raise the trophy. She represented Croatia at world and European championships 105 times, also winning the silver medal at the 1997 Mediterranean Games.

What the numbers say

Podravka are one of the record holders in the Champions League. This will be their 26th season in the elite club competition, and they missed it only once. Out of those 25 participations, they failed to qualify for the group matches only four times. Interestingly, Podravka Vegeta have more participations in the Champions League than Croatian titles.