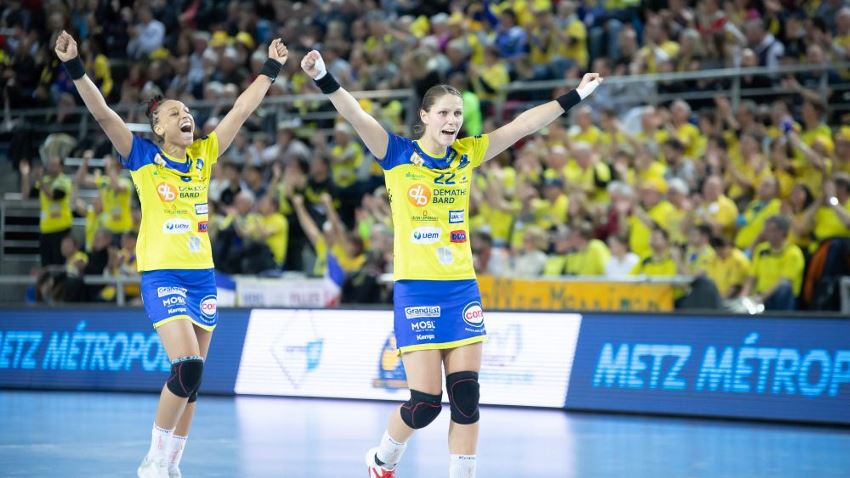 After winning 31:26 in Romania last week, Metz had a five-goal advantage to defend in the second leg of their Women’s EHF Champions League Quarter-final against CSM Bucuresti. And despite being in this situation for the first time, the French side managed to further increase their advantage by one by the end of the match, sealing their ticket to Budapest.

If the first leg had been highlighted by attack, the key to the second leg was defence. Metz managed to restrict their Romanian opponents to just 22 goals.

Maybe they were a little bit nervous, but the locals did not start the game in the best manner. CSM Bucuresti were already up by two on the scoreboard after two minutes played.

The visitors even had a couple of opportunities to further increase their advantage, but they did not manage to. Metz’s defence was particularly efficient, allowing the hosts to grab balls to first make the score even before breaking away on the scoreboard.

Thanks to a goal by Beatrice Edwige, Metz took the lead for the first time after 21 minutes – and they went back to the dressing room leading by two, 11:9, at half-time.

The French side were always likely to secure their ticket to Budapest from the start of the second half – and they broke away to lead by four after a Grace Zaadi goal.

Using their experience from the past seasons, Metz were not going to give CSM Bucuresti any chance to come back. Despite Andrea Lekic’s best efforts, with the Serbian centre back scoring five goals, the visitors could not draw level. An empty net goal by Laura Flippes sealed the DELO Women’s EHF Champions League FINAL4 spot for Metz, who finished with a 23:22 second-leg win.